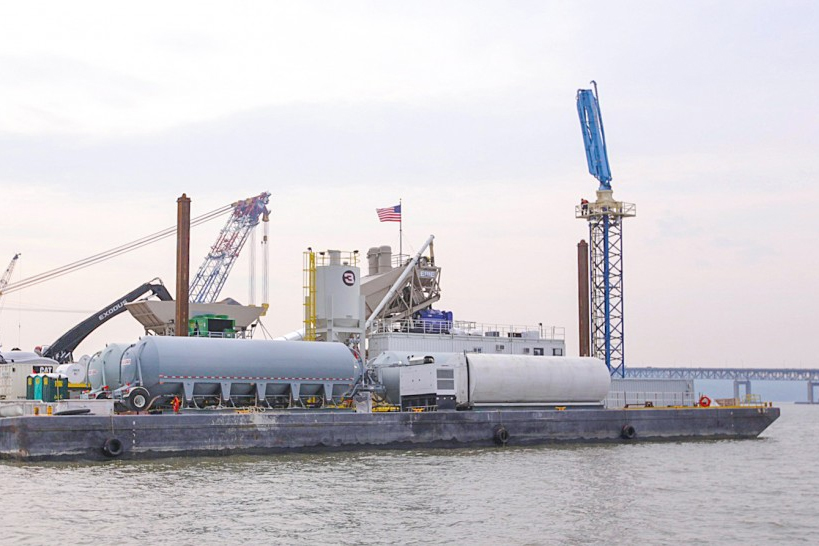 The addition of a third floating concrete batch plant this week enables the New NY Bridge project to shift into an even higher gear. Capable of delivering 180 cubic yards of concrete per hour – more than twice as much as the initial two batch plants combined – the new mixing platform will supply concrete for the new bridge’s remaining foundations and piers as well as its 419-foot towers, which will begin later this summer.

Completing the twin-span bridge requires over 300,000 cubic yards of concrete and the highly efficient batch plants are supplying approximately two thirds of that total. By preparing concrete on the Hudson River, the batch plants help to keep about 20,000 concrete truck trips off local roadways.

The floating batch plants are maneuvered by tugboats to different points on the project, enabling them to produce the required amount of concrete precisely where it is needed. The batch plants hold raw materials—slag, fly ash and cement—in silos, which are built with structural strength to withstand the sometimes-harsh conditions on the river. Each floating batch plant is controlled by an onboard operator and crew who mix the materials housed in the silos with sand, stone and water from nearby support barges in precise proportions to ensure the concrete meets the new bridge’s 100-year service life.

Distinct from the other batch plants, the new batch plant is outfitted with two separate methods for distributing concrete: A pump equipped with a specialized hose extending more than 130 feet to reach more remote locations, and a conveyor belt to supply quantities to areas that are more accessible. The added production and versatility of the new mixer enables it to simultaneously support multiple operations on the project, helping the new bridge assume its iconic shape in the coming months.

Learn more about the local materials used in the bridge’s concrete and the project’s latest milestone.