Progress Updates May 5, 2017 No Comments 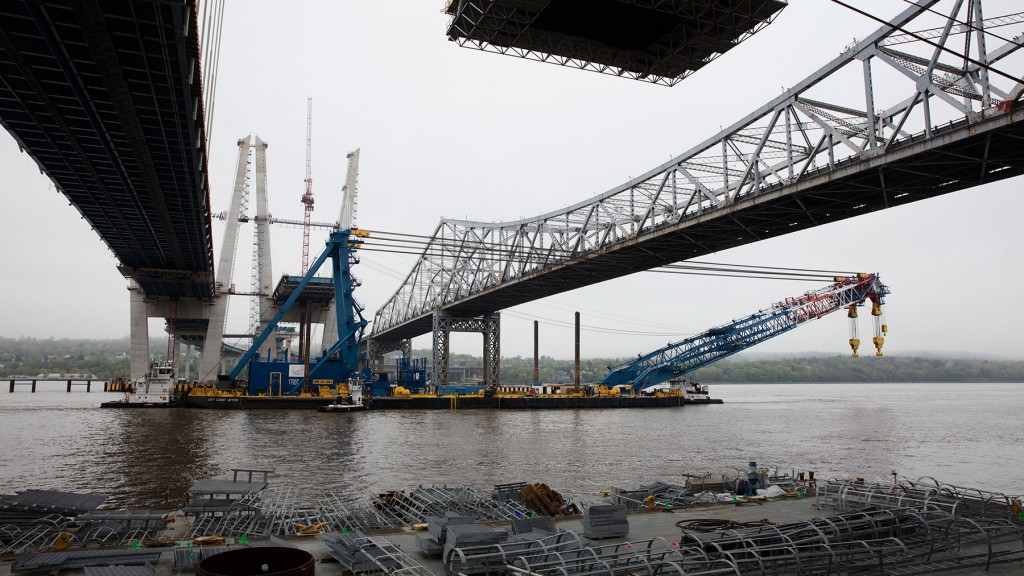 The I Lift NY super crane passes underneath the new bridge that it helped create.

The I Lift NY super crane, the project’s largest piece of equipment, is taking a break.

After completing all of its operations for this phase of construction, the crane was moved early Monday from the northern side of the New NY Bridge project and moored just south of the Tappan Zee Bridge.

The massive machine, which is capable of lifting up the equivalent of 12 Statues of Liberty at once, will play a crucial role in future operations after undergoing routine maintenance and inspections.

TZC crews had to carefully prepare the crane for its transit underneath the new and existing bridges – replicating the trip it made underneath the Tappan Zee Bridge more than two years ago.

In order to safely pass beneath both structures, I Lift NY’s 328-foot lifting arm – taller than a 30-story building — was lowered to be almost parallel to the Hudson River. Also, the floating barge’s ballast tank was filled with nearly two million gallons of water to lower the machine’s height above the river.

The move was scheduled after closely monitoring the Hudson River’s tide. The lower tide allowed the project team to guide the machine through the river’s main navigation channel and anchor it in a restricted Construction Safety Zone.

I Lift NY will remain in this area, just south of the existing Tappan Zee Bridge, as crews perform basic maintenance to the machine. The crane will later be transferred to a dry dock to undergo a thorough inspection. It will return to the project site after the opening of the westbound span to assist with demolition of the existing Tappan Zee Bridge. The removal of the old bridge will allow TZC to complete the eastbound span, which is scheduled to open next year.