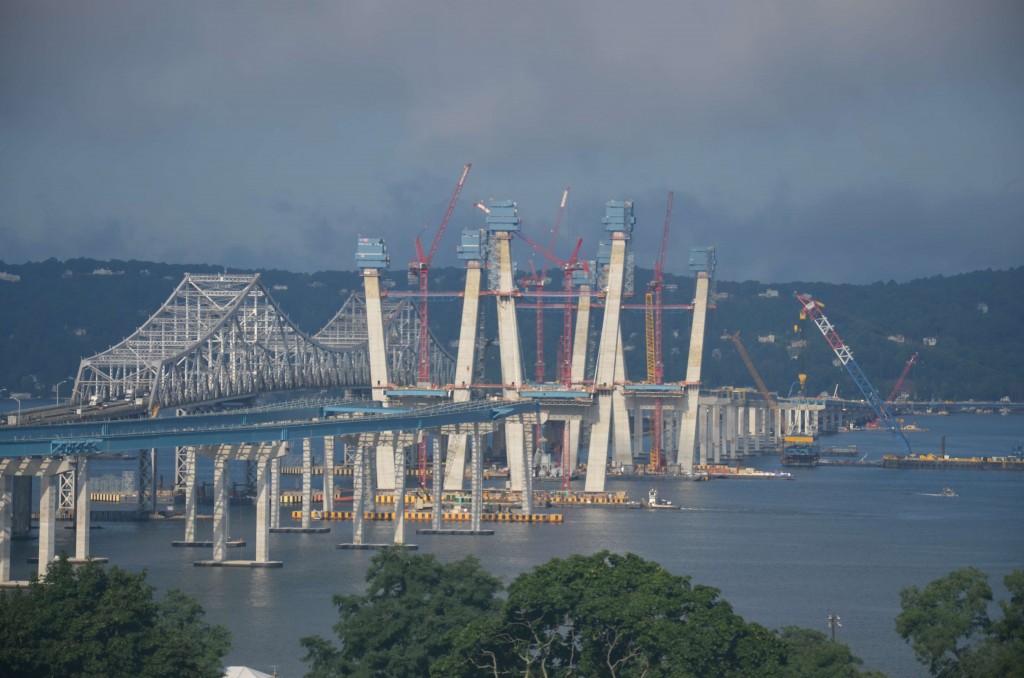 The new bridge’s main span towers on the northern span, seen here on the right, are approaching their final 419-foot height.

The New NY Bridge project is reaching new heights this summer as half of the eight iconic main span towers grow closer to completion. The four massive concrete structures on the northern bridge now stand nearly 400 feet above the Hudson River, just a few dozen feet away from their final 419-foot height.

Construction on the towers started in August 2015.

The towers have slimmed down as they’ve grown taller, from 25 by 26 feet at their base to their current size of 15 by 17 feet. In turn, the project’s self-climbing jump forms – the temporary large blue workspaces atop the towers – have also been modified to match the narrowing shape of the towers. As crews complete tower segments, the jump forms are raised through a screw jack system to proceed higher into the air, so that the following segment can be built on top of the preceding segment. Each of the bridge’s eight towers will require a total of 26 lifts, ranging from 12 to 18 feet in height. Tappan Zee Constructors, LLC (TZC) alters the shape and angle of the forms before each jump, ensuring that the next segment smoothly follows the angled shape of the towers.

“We’re making remarkable progress on the main span thanks to hundreds of hardworking men and women,” said Skylar Lee, TZC’s area project manager for the main span. “There are only a handful of jumps left on the northern bridge before the towers reach their full height.”

Rotating crews that specialize in different aspects of the towers’ construction are responsible for the steady progress. While a team ties steel reinforcements for one tower, another crew might pour concrete for a second tower, while yet another might raise equipment to a higher position for a third tower. TZC’s crews will rotate between the northern bridge’s towers until they reach their full height later this year. Work will then continue on the southern bridge.

At the same time, TZC will continue to install the bridge’s stay cables to the towers. Six have already been connected. The stay cables will be anchored to the interior of the towers and to the exterior of the road deck, and the resulting tension will support the main span roadway.

The New York State Thruway Authority contracted with Tappan Zee Constructors in December 2012 to serve as the design-builder on the New NY Bridge project, which will replace the 60-year-old Tappan Zee Bridge.

Stay up-to-date on the New NY Bridge project by subscribing to our newsletter and following us on Twitter and Instagram.