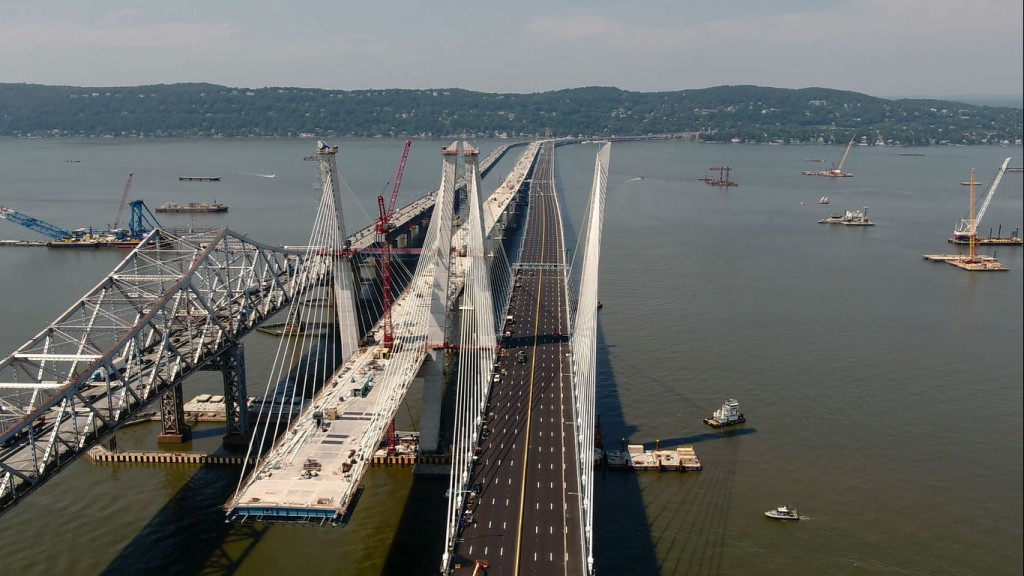 Rockland-bound traffic is scheduled to shift to the Governor Mario M. Cuomo Bridge on Friday night, weather permitting. Motorists traveling on the northbound/westbound Thruway (I-87/I-287) should plan for multiple lane closures and brief traffic stoppages so workers can reconfigure the landings and stripe the lanes at both ends of the new 3.1-mile crossing.

The new bridge consists of two spans, both located north of the Tappan Zee Bridge. The Thruway Authority is opening the first new span with a temporary traffic pattern consisting of four lanes in the Rockland-bound direction. In the fall, Westchester-bound traffic will be shifted from the old bridge to the first span.

Traffic will consist of four lanes in each direction, separated by a concrete barrier to allow for construction of the second span to be completed. Initially, only four northbound/westbound lanes will open to traffic (see graphic below) to allow Tappan Zee Constructors to safely work in the Rockland and Westchester landing areas. In the fall, four southbound/eastbound lanes will be shifted onto the new bridge. This will allow Tappan Zee Constructors to demolish the landings of the old bridge, which occupy the same footprint of the second span, and connect the second span to land.

Beginning Saturday morning, southbound/eastbound traffic will use four lanes on the old (Tappan Zee) bridge. A moveable concrete barrier and/or orange construction barrels will separate traffic from three retired lanes, which will be a construction work zone. 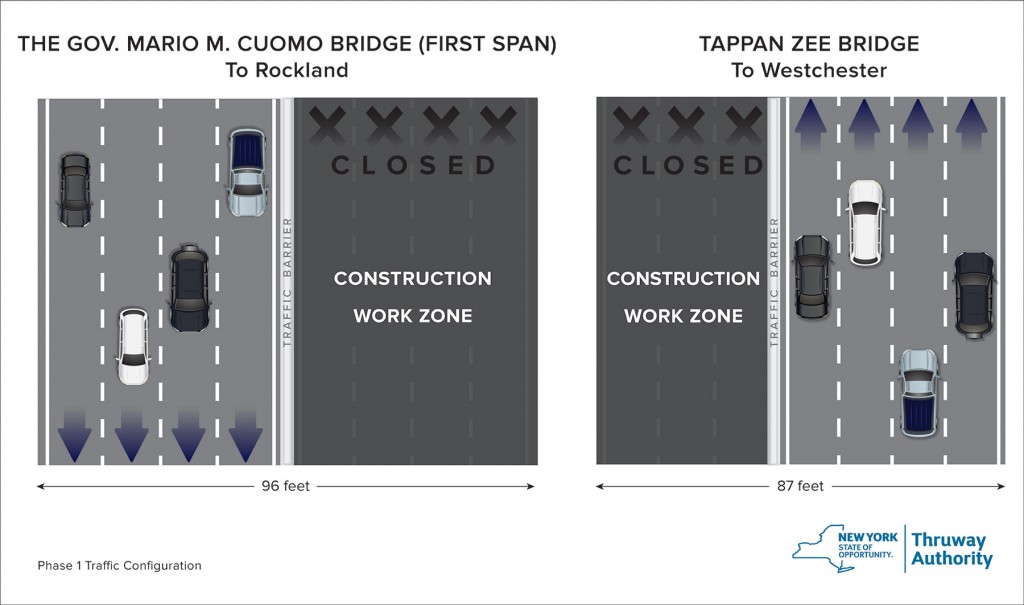 The operation will also necessitate closing the northbound Exit 10 (Nyack – South Nyack – US Route 9W) off-ramp at approximately 9 p.m. The off-ramp is scheduled to reopen by 6 a.m. Saturday. The detour route is detailed in the map below. 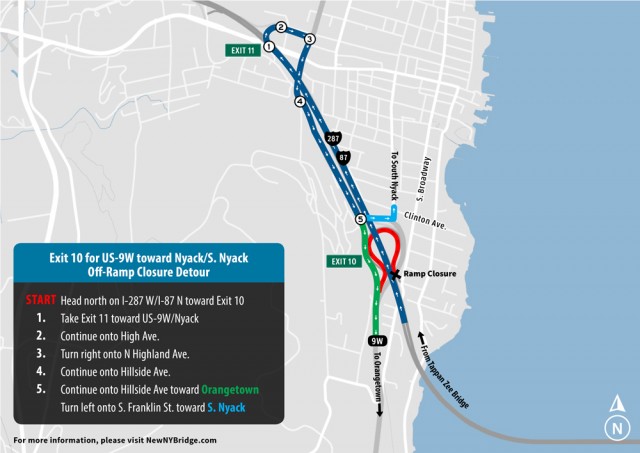 Between midnight and 5 a.m. Saturday, there will be two traffic stops, each lasting up to 20 minutes, of all four lanes of the northbound/westbound Thruway. The traffic stops will allow Thruway Authority and Tappan Zee Constructors workers to stage operations, stripe lanes at both ends of the bridge and shift barriers and equipment. To ensure the public’s safety, State Police will stop and hold all traffic. The first traffic stop will take place near Exit 9 in Tarrytown. A second traffic stop will occur a few hours later near Exit 10 in South Nyack.

Variable Message Signs along the Thruway and other highways in the region have been activated to inform motorists of the traffic shift. Motorists are encouraged to tune to Thruway Highway Advisory Radio for updates.

After all traffic has been shifted onto the new bridge in the fall, this traffic pattern will remain in effect until the second span is complete in 2018. At that time, motorists will experience the full benefits of the twin-span crossing with its 12-foot wide driving lanes, the addition of safety shoulders and lanes for emergency vehicles. Construction of a bicycle and walking path with six unique viewing areas will begin on the westbound span after eastbound traffic has been transferred to the eastbound span.

Under the leadership of Gov. Andrew M. Cuomo, Thruway tolls, including those on the new bridge, are frozen at their current levels until at least 2020.