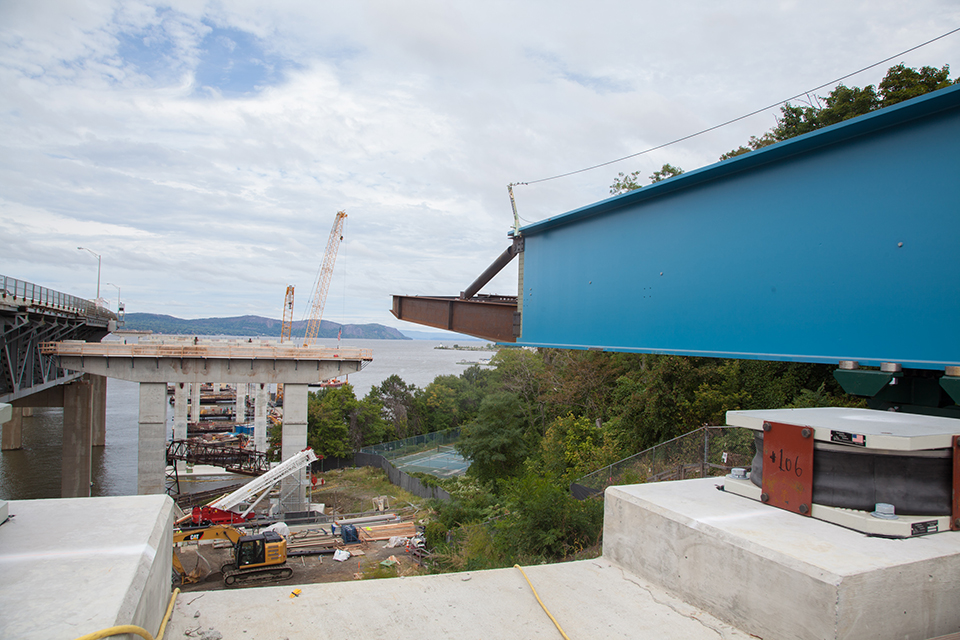 October 1, 2015 – A simple yet innovative technique is being used to install girders from the bridge’s Westchester landing.

As the summer turns to fall in the Lower Hudson Valley, progress continues to march forward on the New NY Bridge project. More and more of the high strength structural steel-blue girder assemblies are being placed across the Hudson River by Tappan Zee Constructors, LLC (TZC), largely with the help of the massive I Lift NY super crane. At both shorelines, however—where shallow waters prevent the use of the super crane—alternate methods were necessary, including the use of construction platforms. The Westchester landing posed a further shoreline challenge: how to safely install the girders over the Metro-North Railroad Hudson Line tracks?

After careful planning and coordination with Metro-North and the Thruway Authority, TZC has engineered a simple yet innovative solution: “push” the girder assembly from the new bridge’s Westchester abutment over the railroad tracks and onto newly built concrete piers. Here’s how it works:

After connecting individual beams into a girder assembly on land and rolling it on a specially-designed track system just east of the abutment, TZC will literally push the assembly west over the railroad tracks toward the first pier in the river. As the operation progresses, additional girders will be connected and pushed westward until the assembly reaches the first river pier.

While the entire operation is anticipated to take approximately three months, work over the Metro-North tracks will occur during three Friday overnights, the first on October 23, and two yet-to-be-scheduled dates in November and December. This approach maximizes safety for both workers and the public and minimizes any potential impact to railroad passengers. Metro-North will adjust its schedule slightly on those three Friday nights to allow the work to be completed. TZC will suspend construction activities when trains pass through the area, resuming when given the “all clear” instruction by Metro-North.

Passengers can rest assured every safety precaution is being taken to keep them safe during this operation.

Learn more about the new bridge’s structural steel and view an aerial tour of the project site.