On the Safe Side TZC Promotes Safety First Culture

Last fall, approximately 200 project site craft employees, subcontractors and TZC staff attended the New NY Bridge project’s first all-hands safety meeting held at TZC’s satellite field office at Hudson Harbor in Tarrytown, N.Y. As part of the meeting, the team was challenged to develop a safety slogan that would gain recognition across the project throughout the year.

The project team initiated the annual contest as a celebration of the project’s safety-first culture. All TZC partners have impeccable safety records and take a “no nonsense” stance when it comes to safety on the job.

Safety is the No. 1 priority on the New NY Bridge. It’s first on the agenda for the daily operations meetings, and safety slogans are on every hardhat as a constant reminder. These are part of a comprehensive safety program, ensuring that all operations are in compliance with all federal, state and local regulations.

The team aims to be proactive rather than reactive when it comes to safety concerns. TZC conducts hours of safety training for each team member, and full protective gear is required at all times on site. By identifying the potential risks, and informing everyone involved, the team eliminates risks before they can happen.

Everyone associated with the project, including TZC, the New York State Thruway Authority, craft employees, and subcontractors working onsite, were invited to participate and submit a slogan and design concept to reflect an integrated health and safety theme. This first annual slogan will be used project-wide on banners, hard hat stickers, and elsewhere to promote the team’s collaborative focus on safety.

Michael Colamarino, a local 137 operator, was selected as the winner. The TZC safety team also contributed to the winning slogan: Take Zero Chances – We Won’t Let Safety Take the Day Off.

The project team plans to host this contest annually and select a new slogan for each year on the project. 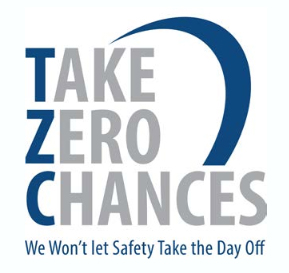