Next on Deck First of Thousands of Road Deck Panels Placed 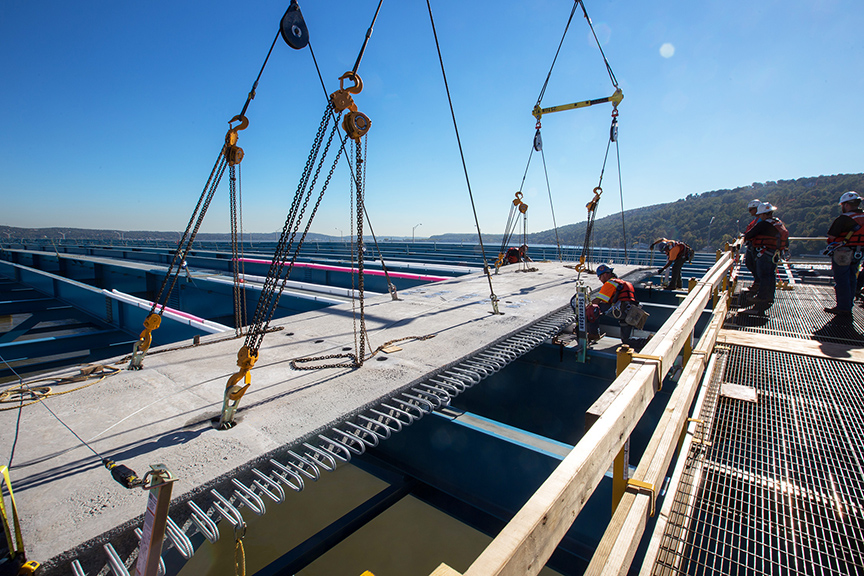 Workers make final adjustments as a high-strength road deck panel is positioned for the new bridge.

After more than two years of hard work involving a variety of innovative solutions, the New NY Bridge project reached another milestone this month by installing the first sections of the crossing’s new bridge road deck.

Resting on previously-installed girder assemblies, the deck of the new bridge’s approach spans will be built by placing nearly 6,000 steel-reinforced concrete panels over the coming year. (The approach spans are portions of the bridge supported by individual piers that extend into the river from the two shores until they reach the bridge’s cable-stayed main span). Weighing as much as 74,000 pounds each, the approach span deck panels are 12 feet long, range between 22 and 45 feet wide and nearly 11 inches thick. When fully assembled, the deck panels for both the approach and main spans will comprise a surface area of more than 65 acres – approximately equal to the deck space of all 19 U.S. Navy aircraft carriers currently in service. 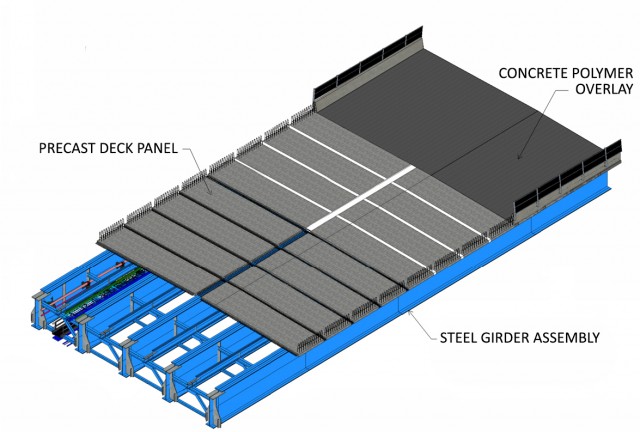 Individual precast deck panels are joined together atop steel girder assemblies and then covered with a concrete polymer overlay.

The deck panels are prefabricated off-site under controlled conditions, allowing for a safer working environment, higher quality workmanship and better curing than had they been cast on the Hudson River in variable weather conditions.

Once completed, the panels are barged downriver from the Port of Coeymans in Albany County and raised into place by the project’s armada of cranes.

The individual panels are joined together by pouring concrete around the galvanized steel reinforcement that extends out from each panel. The final driving surface will consist of a 1-inch concrete polymer overlay which will ensure durability and a safe, even ride for drivers.

In addition, drivers will get a smoother ride and neighbors will hear less road noise thanks to dramatically fewer expansion joints on the new bridge: just 12 in the eastbound direction and 13 in the westbound, as compared to 198 on the existing Tappan Zee Bridge.

Precast deck panels also will be used for the new bridge’s main span. The 973 main span deck panels are currently being manufactured in Schuylerville, NY and are scheduled for installation in 2016.

Piece by piece, the deck of the new crossing is advancing across the Hudson River. Follow the progress via the project’s webcams or visit the New NY Bridge project construction viewing platforms at Scenic Hudson RiverWalk in Tarrytown and Memorial Park in Nyack.

Learn more about the new bridge’s structural steel and view an aerial tour of the project site.