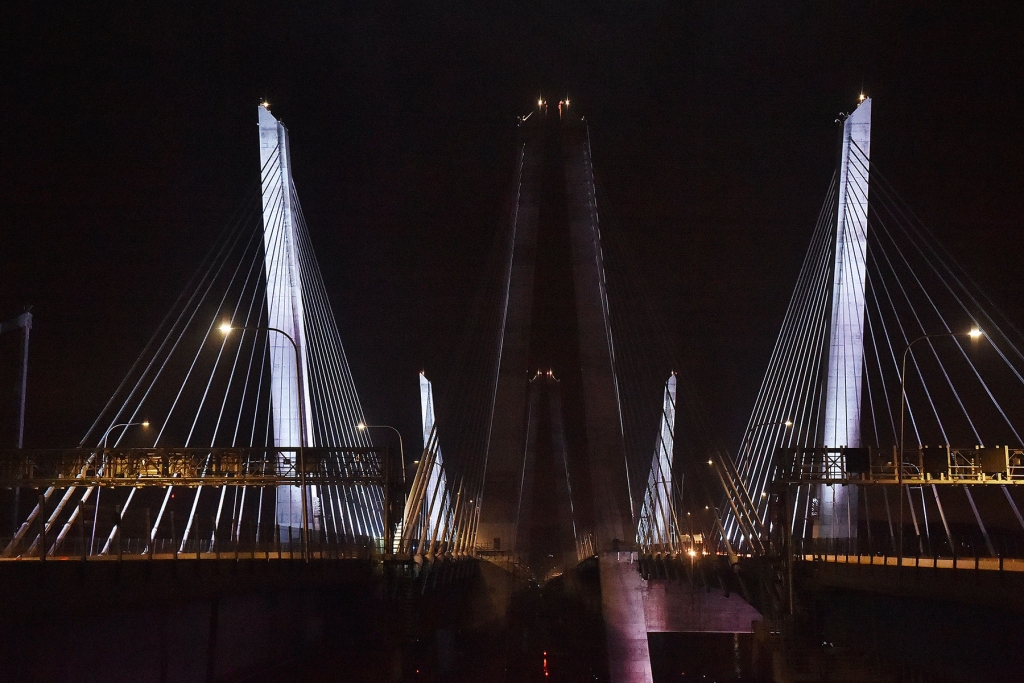 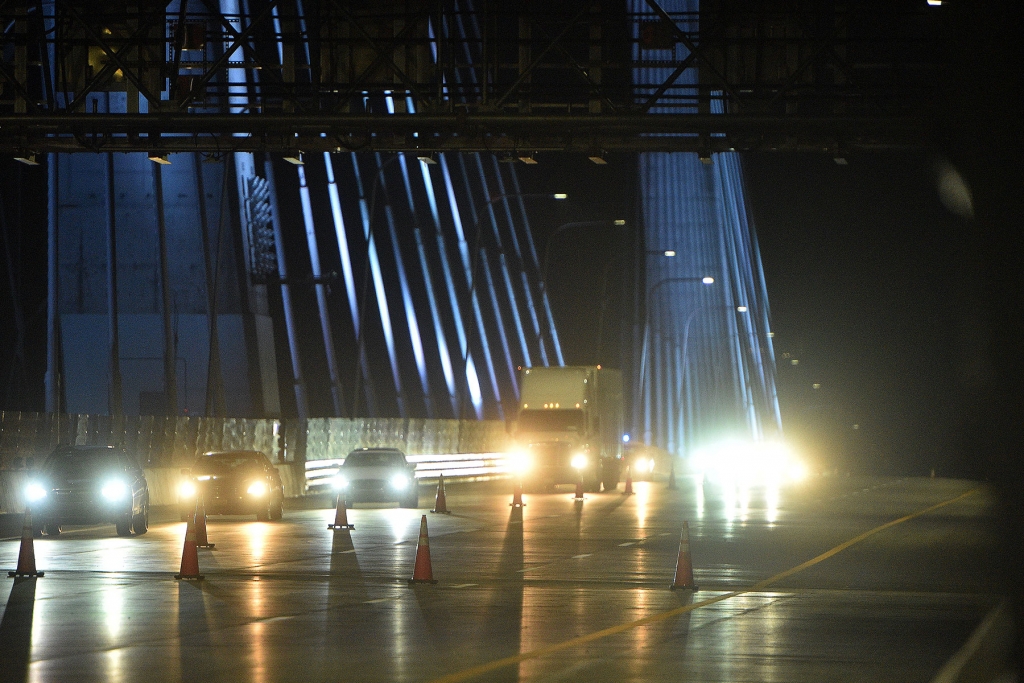 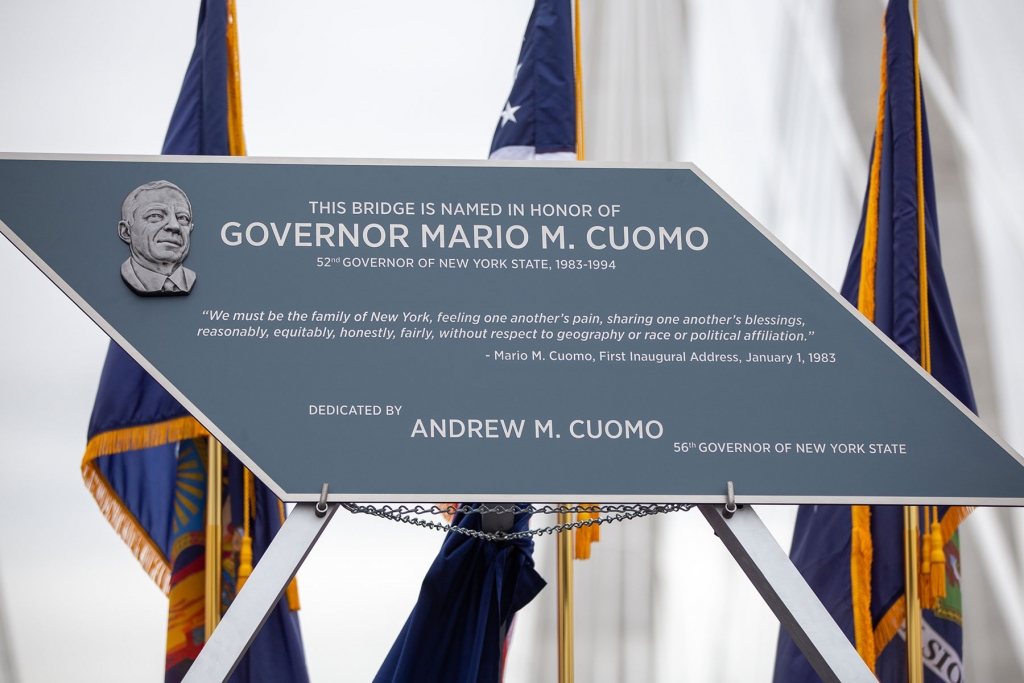 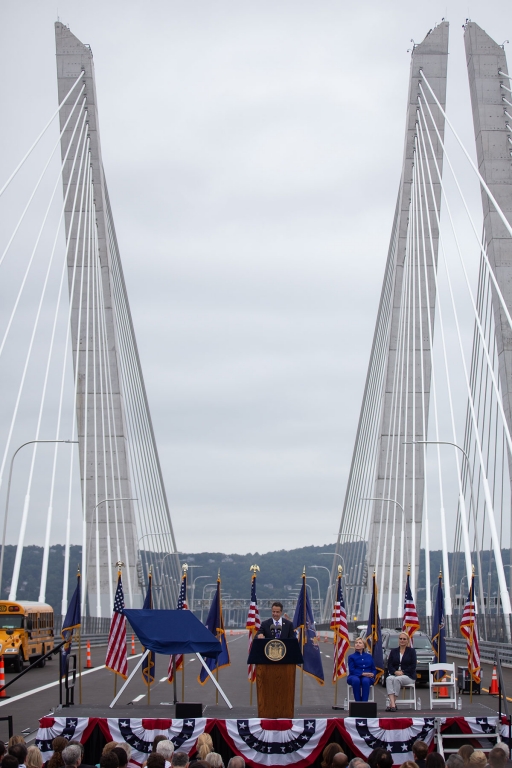 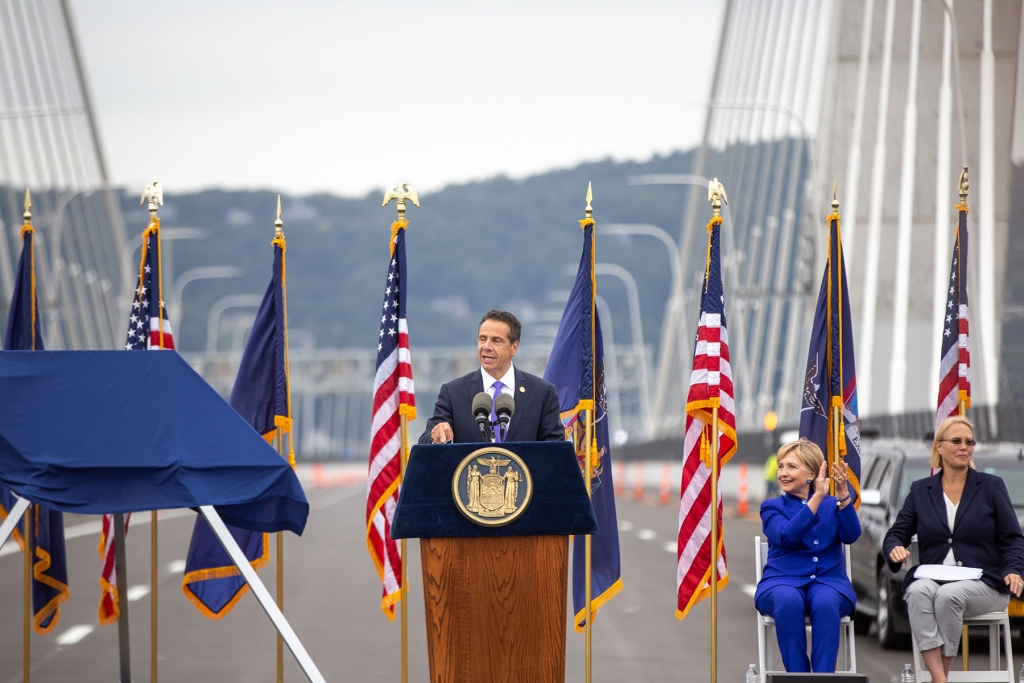 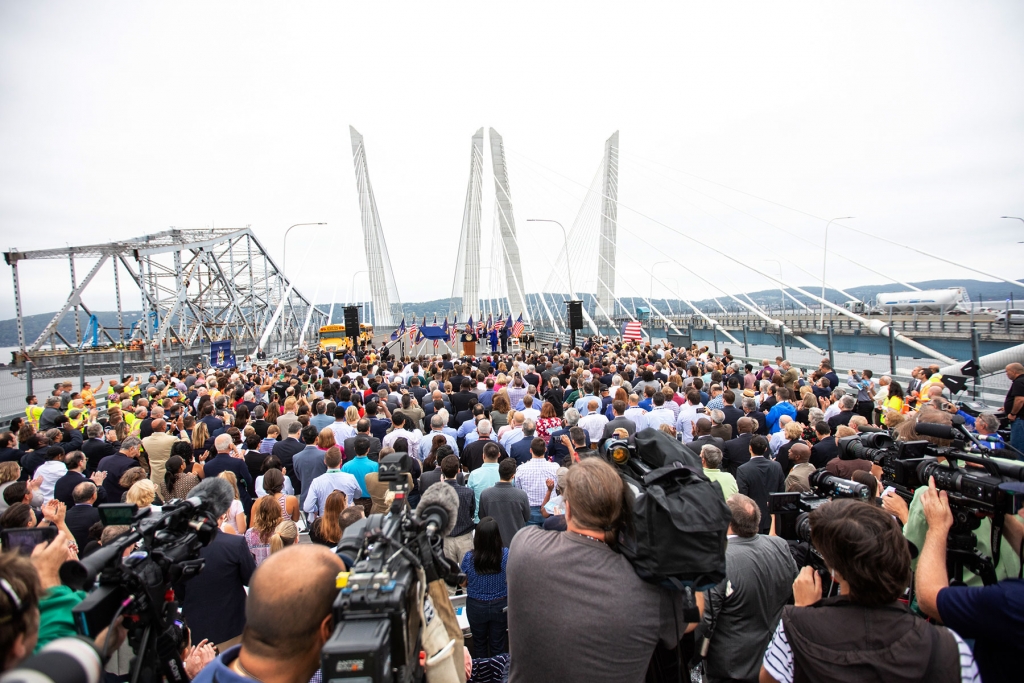 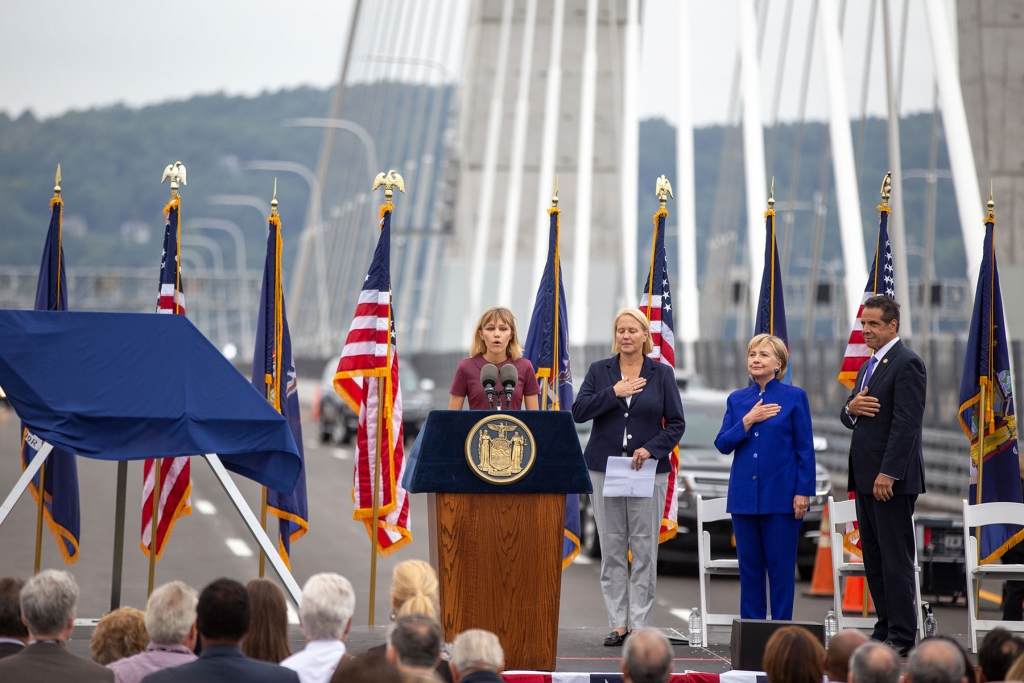 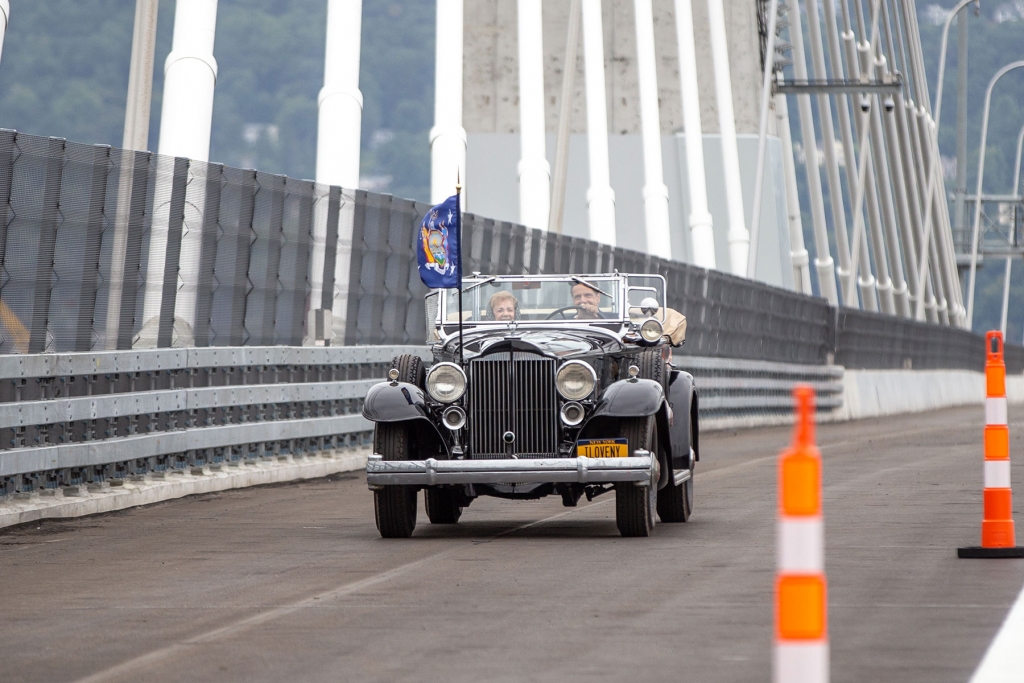 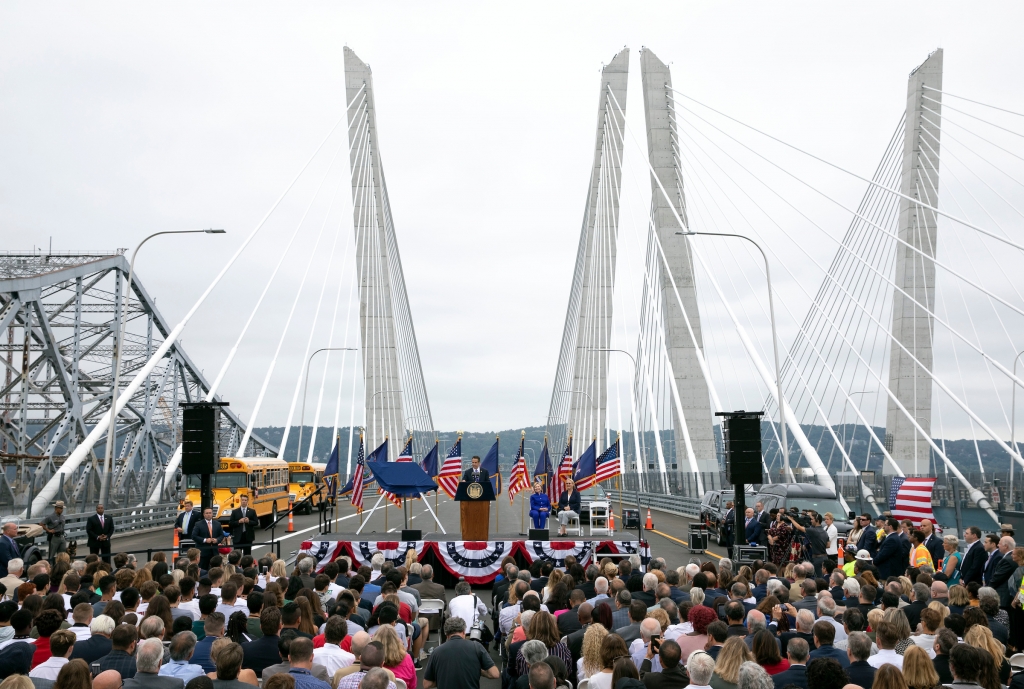 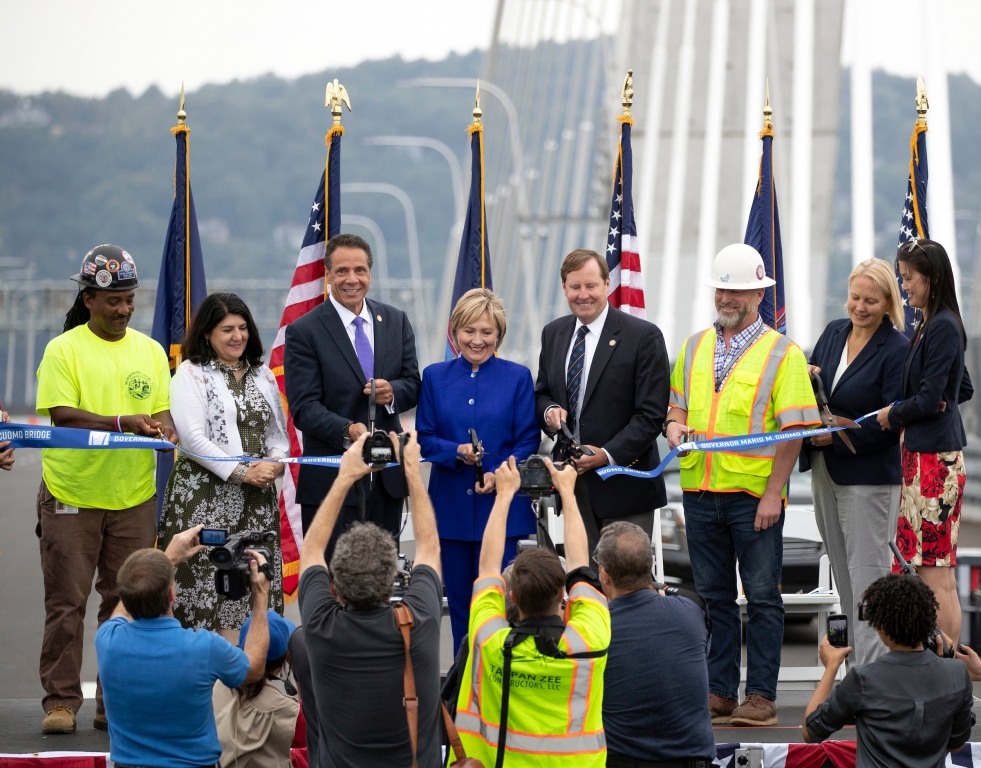 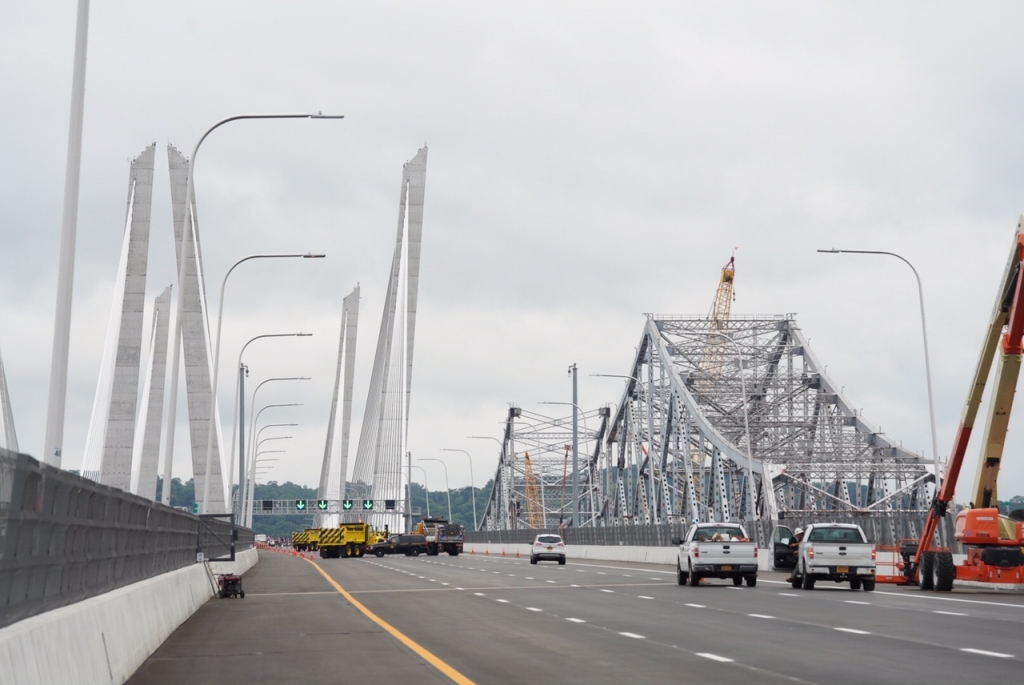 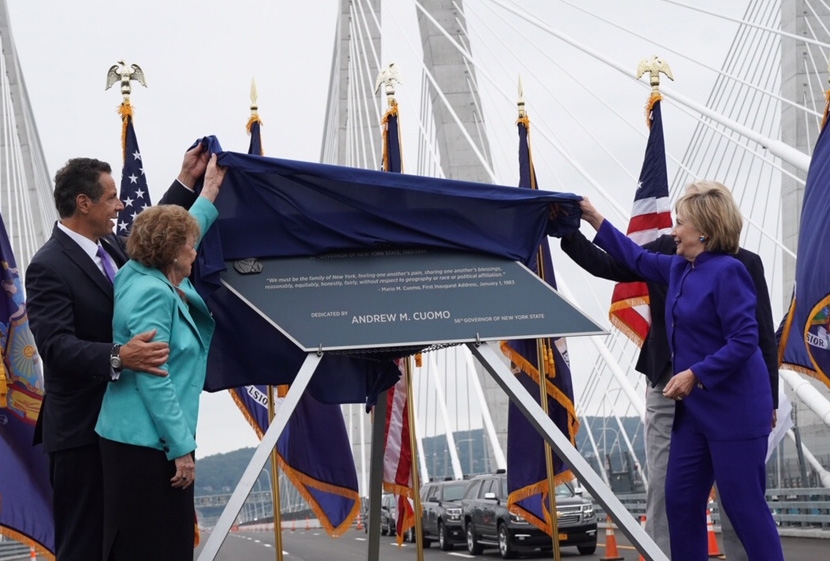 Governor Andrew M. Cuomo today announced the grand opening of the eastbound span of the new Governor Mario M. Cuomo Bridge, an iconic twin-span cable-stayed crossing linking Westchester and Rockland counties. The $3.98 billion project to construct the 3.1-mile bridge — the first cable-stayed bridge across the Hudson River — and its ancillary facilities is one of the largest in the United States and the biggest in the history of the New York State Thruway Authority. Operations to shift four lanes of Westchester-bound traffic to the new span will begin at approximately 8 o’clock tonight, weather permitting, with the first cars crossing early Saturday.

The Governor celebrated the opening on the new bridge with hundreds of dignitaries and community members from the Hudson Valley and across the state, workers who built the new bridge, high school students from Irvington and Nyack, Nyack High School’s Red Storm Marching Band and singer-songwriter and Rockland County native Grace VanderWaal, who performed “The Star-Spangled Banner.” In addition to the unveiling of a commemorative plaque, the Governor also drove across the new bridge in a ceremonial first ride in President Franklin Delano Roosevelt’s 1932 Packard.

“Government at its best should actually effectuate change, help people, solve problems, make a difference. Not in the abstract and theoretical, but in the real and in the practical,” Governor Cuomo said. “By completing a project of this magnitude on time and on budget, this bridge says that government has capacity. Society has capacity. We can confront our problems. We can solve our problems when we do it honestly, constructively and collectively.”

The Governor Mario M. Cuomo Bridge project replaces the retired 62-year-old Tappan Zee Bridge with two new state-of-the-art cable-stayed spans – one Rockland-bound and one Westchester-bound. The first, Rockland-bound span opened last year in a temporary traffic configuration comprised of four traffic lanes in each direction to allow design-builder Tappan Zee Constructors to complete construction of the second span in the footprint of the old bridge at its landings. The new bridge will serve more than 140,000 motorists each day.

Following tonight’s shift, eastbound motorists will have access to four general traffic lanes and emergency shoulders, and a dedicated bus lane will open next month for eastbound traffic. The fully completed project will also include a bicycle and walking path.

Rockland-bound motorists will continue to use their current four lanes on the westbound span. In the coming weeks, the four lanes of westbound traffic will be shifted to the opposite side of the span—where the eastbound traffic was previously—to allow for on-bridge construction of the bicycle/pedestrian path and its six overlooks.

The Governor Mario M. Cuomo Bridge is the first cable-stayed bridge across the Hudson River. Featuring eight 419-foot towers standing at a five-degree angle, the twin-span bridge has a total of 192 stay cables that would stretch 14 miles if laid end-to-end. A cable-stayed bridge uses steel cables placed at an angle to connect the bridge deck to vertical towers that extend high above the roadway.

More than 220 million pounds of all-American steel was used to build the bridge. Approximately 7,000 workers have contributed to date and nearly 11.5 million work hours have been dedicated to the project.

Designed to last 100 years without needing major maintenance, the Governor Mario M. Cuomo Bridge is one of the biggest active bridge projects in the nation and the largest in the history of the New York State Thruway Authority. The project has been recognized across the nation, including by former President Barack Obama, who put it at the top of his list of critical infrastructure priority projects.

At Governor Cuomo’s direction, the New York State Thruway Authority has managed the bridge replacement project since 2013 with two fundamental objectives — first, to fully open the bridge to traffic in 2018, and second, finish the bridge at or below the budgeted cost of $3.98 billion.

Championed by Governor Cuomo, this project has used the design-build construction process, which incentivizes the private sector to be creative on methods that speed up construction time and reduce costs. This model is being used across New York’s large infrastructure projects, including on the new Kosciuszko Bridge in New York City.

The New York State Thruway Authority is the owner of the project to replace the Tappan Zee Bridge, and TZC is the consortium designing and building the new bridge. The project remains on time and on budget.

Additionally, the project has met its Disadvantaged Business Enterprise goal of $314 million established by the Federal Highway Administration.

Governor Cuomo also announced that a competition will be held to commission two iconic sculptures by New York State artists for the Governor Mario M. Cuomo Bridge. Remnant steel salvaged from the retired Tappan Zee Bridge will be made available to the two winning artists to incorporate into their sculptures.

Artists will be selected this year through a competitive multi-stage panel review process administered by ArtsWestchester and the Arts Council of Rockland. The sculptures will be placed on designated New York State Thruway Authority-owned land on the Tarrytown (Westchester County) and South Nyack (Rockland County) sides of the bridge’s dedicated bicycle and walking path in 2019.

ArtsWestchester will serve as project manager in the Request for Proposals from New York State artists and in the commissioning of the two sculptures in collaboration with the Arts Council of Rockland. Further details about the competition will be provided at a later date.

“The new Governor Mario M. Cuomo Bridge is a testament to the infrastructure investments and achievements in New York,” said Lieutenant Governor Kathy Hochul. “With the opening of both spans of the bridge, traffic flow will improve significantly for drivers and the bridge will contribute greatly to the economy of the area. The project was completed on time and on budget thanks to the many hardworking partners involved. This is a historic day for New York State and the bridge stands as an icon of our progress and strength.”

Thruway Authority Acting Executive Director Matthew J. Driscoll said, “The iconic Governor Mario M. Cuomo Bridge is another bold step toward revolutionizing our state’s infrastructure, easing commutes for travelers and powering the economic engine for communities in the Hudson Valley. Governor Cuomo had both the vision and the will to replace the deteriorating Tappan Zee Bridge with a stunning state-of-the-art crossing that will serve this critical economic corridor in the Northeast well into the next century.”

New NY Bridge Project Director Jamey Barbas said, “For the second time, we are opening a new span on the beautiful Governor Mario M. Cuomo Bridge. Motorists will benefit from its wider lanes, emergency shoulders and dedicated bus lanes, followed by a path for cyclists and pedestrians. On behalf of all the hard-working men and women who worked on this project, I thank Governor Cuomo for investing in the future by modernizing our infrastructure.”

Congressman Eliot Engel said, “For years, construction of this beautiful new bridge was the largest infrastructure project in the nation. At a time when our roads and bridges are crumbling, Governor Cuomo and New York were leading the way in proving here in America we can still do big things, and solve big problems, if we just have the political will to do so. Today’s opening of the second span of the Governor Cuomo Bridge is a testament to that will, and to the amazing skill of our labor force here in New York.”

Congresswoman Nita Lowey said,“The Governor Mario M. Cuomo Bridge, a tribute to the legacy and accomplishments of the late Governor, will serve as an important cornerstone of our community. For years, politicians have paid lip service to replacing the dilapidated Tappan Zee Bridge, but under Governor Cuomo’s leadership that has changed. I’m proud to have supported Governor Cuomo’s vision and to have helped secure $1.6 billion in funding through a historic federal loan to make this new bridge a reality for the Lower Hudson Valley. I want to thank Governor Cuomo for his dedication to this vital project, which will accommodate countless New Yorkers for generations to come.”

Senate Democratic Leader Andrea Stewart-Cousins said, “The official opening of the new Governor Mario M. Cuomo Bridge, with the Westchester-bound lanes opening and coming into operation, is a great day for Westchester and all of New York. This new bridge, the largest public works project in the nation, will help ease congestion, encourage investment, and help grow the economy for Westchester communities and beyond. I commend Governor Andrew Cuomo on leading this effort and I look forward to this bridge improving the quality of life in our communities for generations to come.”

Joanne M. Mahoney, Chair, Thruway Board of Directors, and Onondaga County Executive said, “For years, New Yorkers talked about building a new bridge to replace the ageing Tappan Zee. But nothing happened. That changed under Governor Cuomo. Since day one, the Governor has made building a new bridge a top priority, turning words into action. With Governor Cuomo at the helm, we fast-tracked this historic project to build a state-of-the-art bridge that would carry us far into the future. And we got it done.”

Westchester County Executive George Latimer said, “This bridge is proof that government can achieve real change for our residents, for our communities, and for our economy. Under Governor Cuomo’s leadership, New York State stepped up to address a critical need and got it done efficiently, effectively, and beautifully. The new state-of-the-art bridge will significantly improve travel for New Yorkers and ease the flow of freight through New York, including faster shipping times and lower costs for businesses throughout the entire Northeast Corridor.”

Rockland County Executive Ed Day said, “The opening of the second span of the Mario M. Cuomo Bridge marks yet another significant milestone in this administration’s efforts to transform New York’s infrastructure. Not only will New Yorkers and tourists be able to enjoy a quicker, safer commute on this new bridge, it has the potential to spur economic development in the region for decades to come. I would like to thank Governor Cuomo for his leadership and all the hard-working men and women who made this day possible.”

Tarrytown Mayor Drew Fixell said, “Today is truly a remarkable day for Westchester and all of New York State as we celebrate the opening of the second span of the New Governor Mario Cuomo Bridge. This bridge will bring enormous benefits to our entire region, and will greatly enhance safety, ease congestion and reduce pollution. I thank Governor Cuomo, his staff and the thousands of workers who made this monumental project possible.”

South Nyack Mayor Bonnie Christian said, “This beautiful bridge will leave a lasting impact for generations to come, making travel easier, safer, and more comfortable for drivers. And for the countless businesses that rely on this bridge to bring goods to market, we are investing in your future and helping move our economy forward. I applaud Governor Cuomo for spearheading this transformative project from day one and setting an example for the nation to follow.”

Nyack Mayor Don Hammond said, “While others have talked for years about the need for a new bridge here in the Hudson Valley, Governor Cuomo took action and got it done. This bridge is a much needed investment in our local infrastructure, and the completion of the new Mario Cuomo Bridge will have a positive impact on our community and our regional economy for years to come. I commend the Governor for his vision, and thank all those who put in the hard work to make today happen.”

Tappan Zee Constructors President & Project Executive Terry Towle said, “Opening the eastbound span to traffic is a major milestone for our project. Over the last five years, our team of designers and builders has made exceptional progress on one of the largest construction projects in the country. We have a tremendous team working to build an iconic bridge that will serve this community for generations.”