Tappan Zee Constructors (TZC) is preparing to remove steel sections of the Tappan Zee Bridge. The project’s I Lift NY super crane will return to service next month to facilitate the dismantling, and will be relocated near the Westchester landing next week. The demolition materials will be placed onto barges and transported to ancillary facilities including the Port of Coeymans in Albany County.

The work requires the use of mobile cranes and other equipment as TZC removes large sections of concrete and steel from the area, employing noise mitigation techniques to minimize impacts to residents. Work is scheduled to occur six days per week (Monday through Saturday), between the hours of 6 a.m. and 10 p.m. – however the area remains inaccessible to motorists at all times. Vehicular traffic is instead being detoured to Route 9W.

Pedestrians and cyclists have limited access to River Road. Project safety personnel will hold pedestrians and cyclists for up to an hour on weekdays and up to 15 minutes on Saturdays. Access will be provided without extended waiting periods on Sundays, however the Thruway Authority strongly encourages travelers to avoid the area until construction operations conclude in early November.

Roadway Preparation
TZC continues to prepare the second span’s roadway in Rockland and Westchester counties. Demolition activities will require the use of machines to break pavement, cut deck panels and remove the abutments of the Tappan Zee Bridge. TZC will utilize noise abatement measures in the area and continue to monitor noise and vibration levels as work continues. 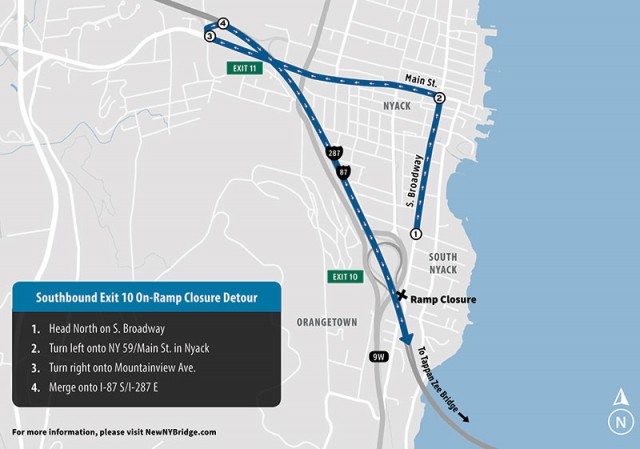 All four Rockland-bound (northbound/westbound) lanes will remain open during the operation. Specific lane and ramp closure times are listed in the chart below.

LANE & RAMP CLOSURES NEAR THE BRIDGE

Boater Safety
Expect periodic closures of the main navigation channel due to on-going construction and extensive demolition activities. Cranes, barges and other equipment will occupy parts of the channel during this time. Boaters are strongly encouraged to avoid the project site during the closures and to avoid the Regulated Navigation Areas, located east and west of the main channel.

Times and dates of the closures are subject to change and will appear in the U.S. Coast Guard’s weekly Notice to Mariners; on the project’s Twitter feed (@NewNYBridge); and broadcast on Marine Radio Channel 22A. Tappan Zee Constructors can be contacted via Marine Radio Channel 16 for assistance.

More boater safety information, including the U.S. Coast Guard Notice to Mariners, a construction site map and GPS-tracked construction vessel locations, can be found at NewNYBridge.com/Boater.

The New York State Thruway Authority provides this information as a public service. Any reliance you place on such information is therefore strictly at your own risk. Nothing in these guidelines shall supersede the actual construction conditions, and regulations set forth by the U.S. Coast Guard.