How We Got Here Completing the First Span’s Roadway 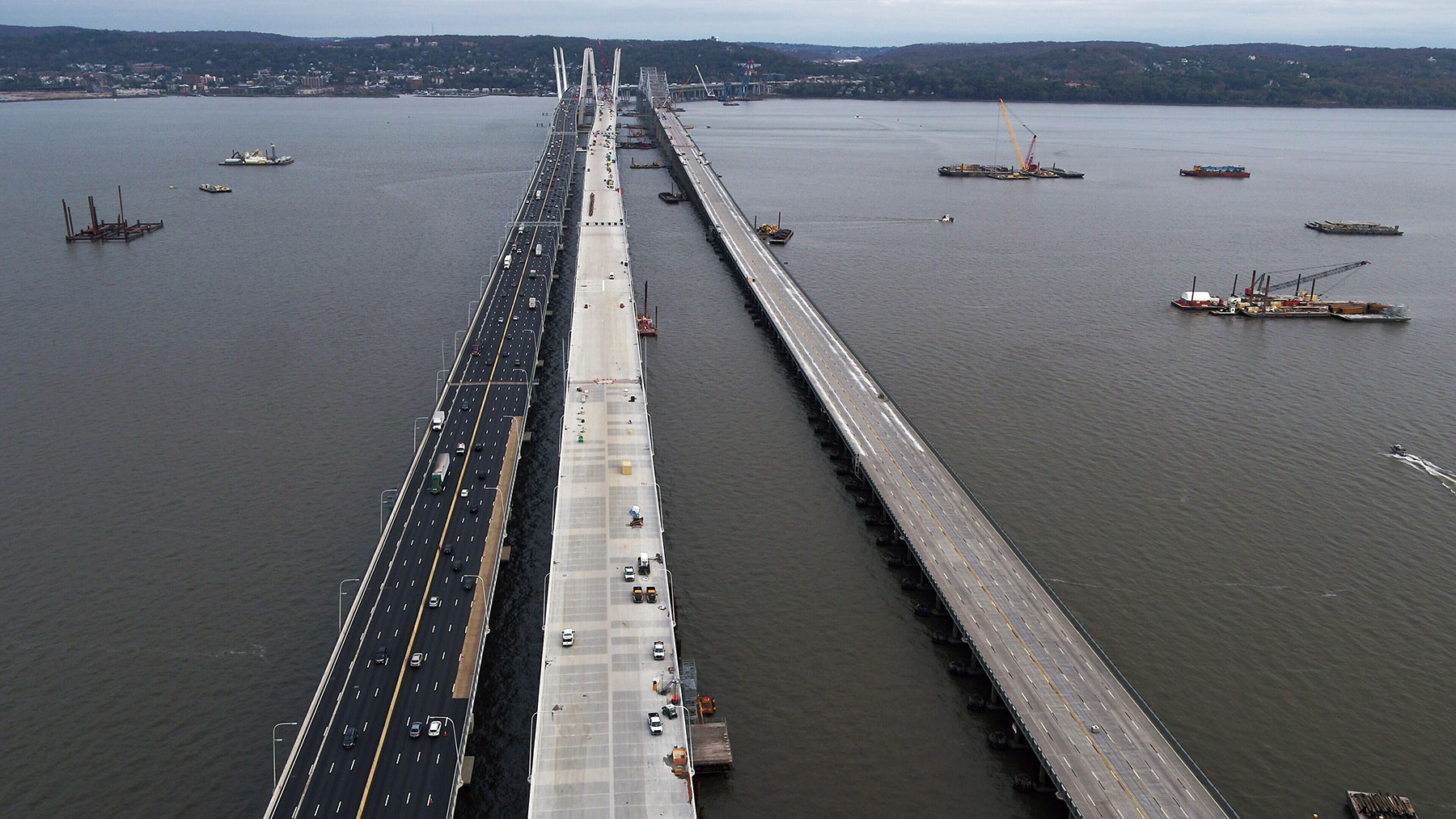 This is the fourth entry in a series of stories chronicling the construction of the Governor Mario M. Cuomo Bridge, which is set to fully open to traffic later this year.

Throughout the first half of 2017, Tappan Zee Constructors (TZC) focused on completing the roadway of the Governor Mario M. Cuomo Bridge’s first span.

Each span is composed of more than 50,000 tons of American-forged steel-blue girders, connecting more than 40 concrete piers across the Hudson River.

While the majority of the girders were installed by the I Lift NY super crane in pre-assembled groups of two and three—some weighing up to 1,100 tons—the final connections to the bridge’s landings required a different approach. In Rockland County, TZC used a smaller, land-based crane to safely install the individual beams on-land. The Westchester County landing posed a different challenge, as work needed to take place over the Metro-North Railroad Hudson Line tracks (pictured below). 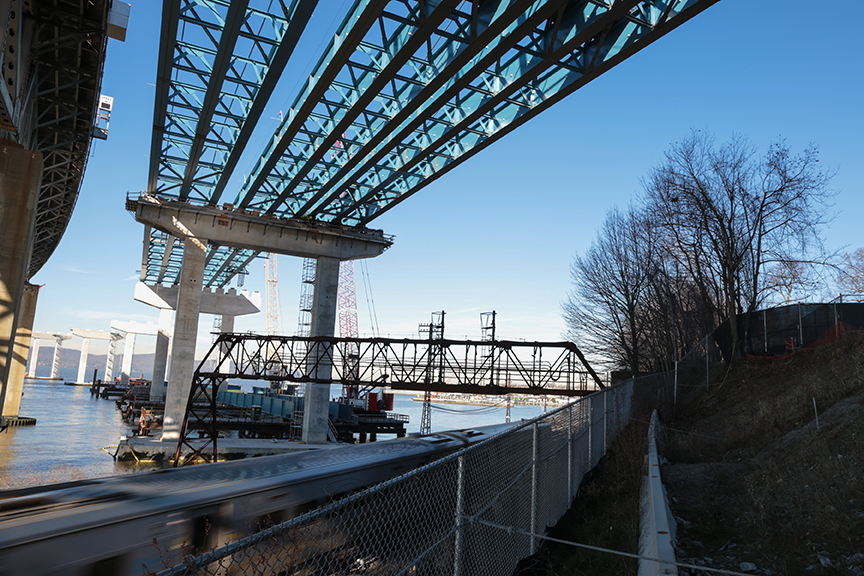 After careful planning and coordination with Metro-North and the Thruway Authority, TZC engineered a simple yet innovative solution: “push” the girders from the new bridge’s Westchester abutment over the railroad tracks toward the river’s concrete piers. 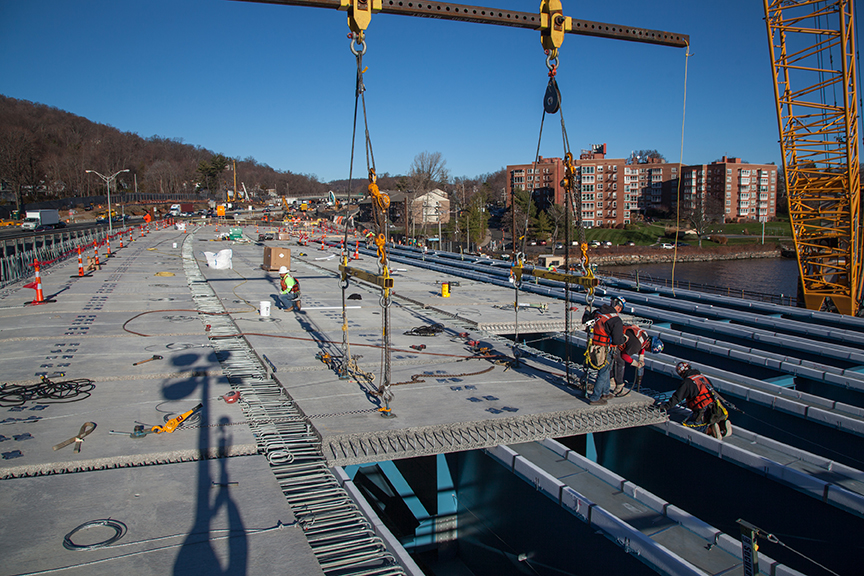 The installation of the steel girders allowed TZC to create the base surface of the road deck with steel-reinforced concrete panels. To complete the first span, more than 3,000 interlocking panels (pictured above) were produced offsite and transported via barge.

Most of the deck panels were installed with conventional cranes, but those located in higher areas were installed via a derrick crane. After the panels were safely placed atop the bridge’s steel girders, they were connected into a single base surface with steel reinforcement and concrete, provided by the project’s floating batch plants.

When both spans are complete later this year, the deck panels will comprise a surface area of more than 65 acres – approximately equal to the deck space of all 19 U.S. Navy aircraft carriers currently in service. 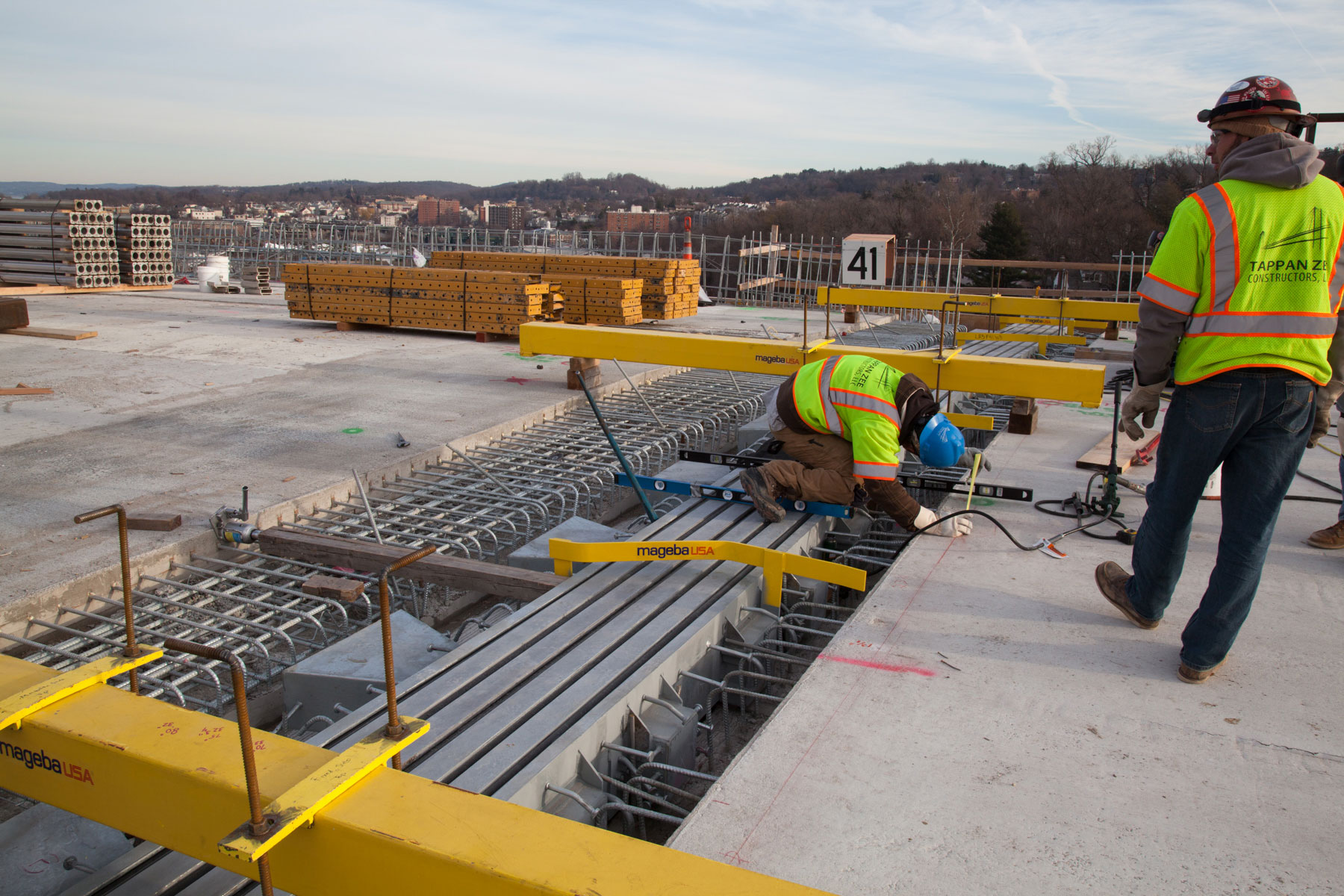 Like all steel and concrete structures, the bridge’s fully connected roadway is susceptible to slight expansion and contraction due to varying environmental conditions. These movements are effectively absorbed by the bridge’s expansion joints (pictured above), which interlock with the road deck panels. These joints utilize a combination of molded rubber and small steel beams to help maintain a smooth driving surface even in extreme conditions.

The new bridge’s expansion joints are a significant upgrade when compared to the Tappan Zee Bridge. Advancements in technology as well as design allowed TZC to reduce the amount of expansion joints required, from nearly 200 on the old bridge to a baker’s dozen on the new westbound span. 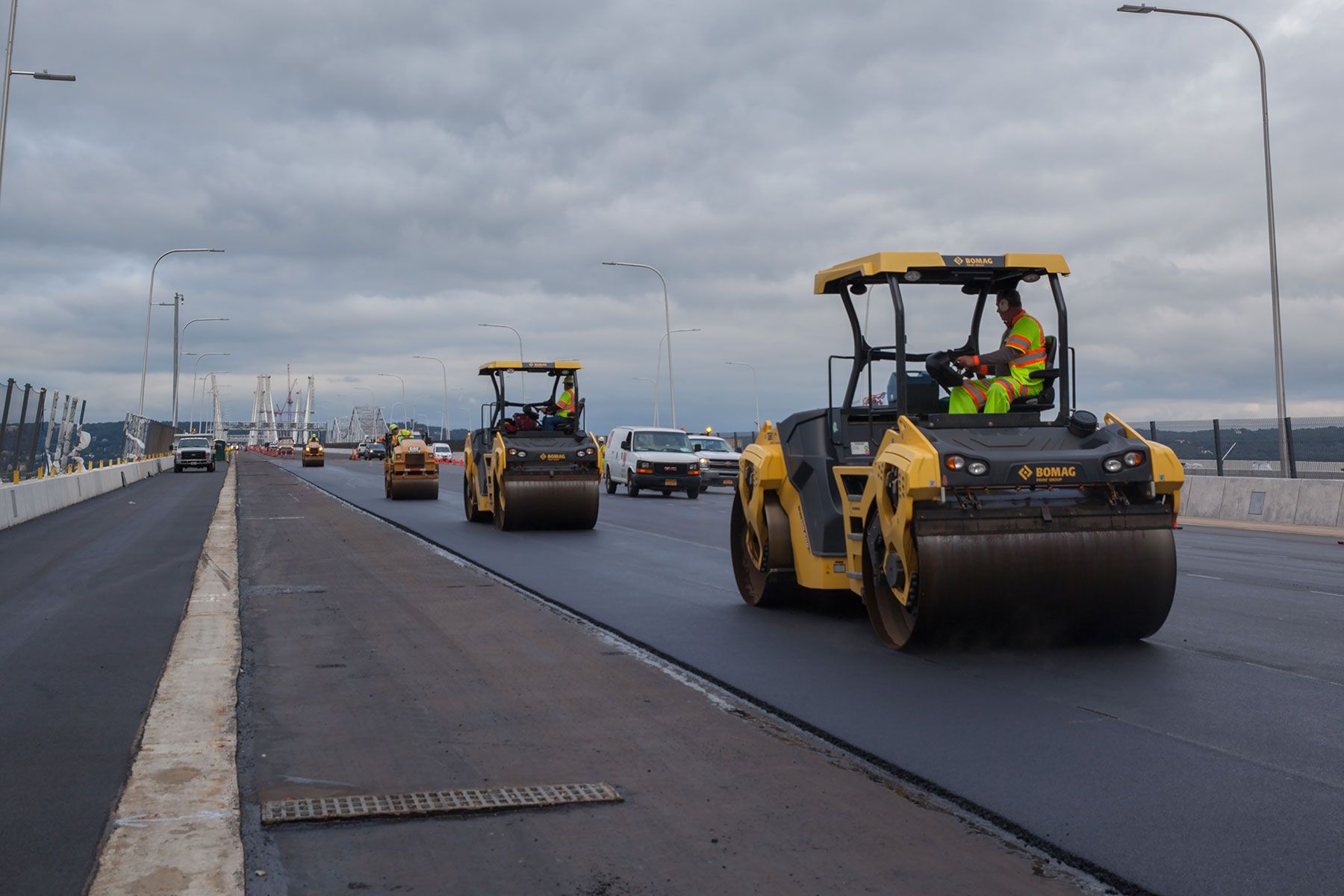 In the weeks leading up to the opening of the first span, TZC applied a protective overlay (pictured above) to the road deck to enhance its durability and create the final driving surface. By late summer 2017, TZC crews completed the bridge’s roadway lighting, lane striping and signage. Additionally, the landings in Westchester and Rockland were prepared for their connection to the New York State Thruway.

On August 24, Governor Andrew M. Cuomo spoke to a crowd of more than 800 dignitaries and residents at the ribbon-cutting ceremony on the main span before leading an inaugural procession across the new cable-stayed crossing (pictured below). 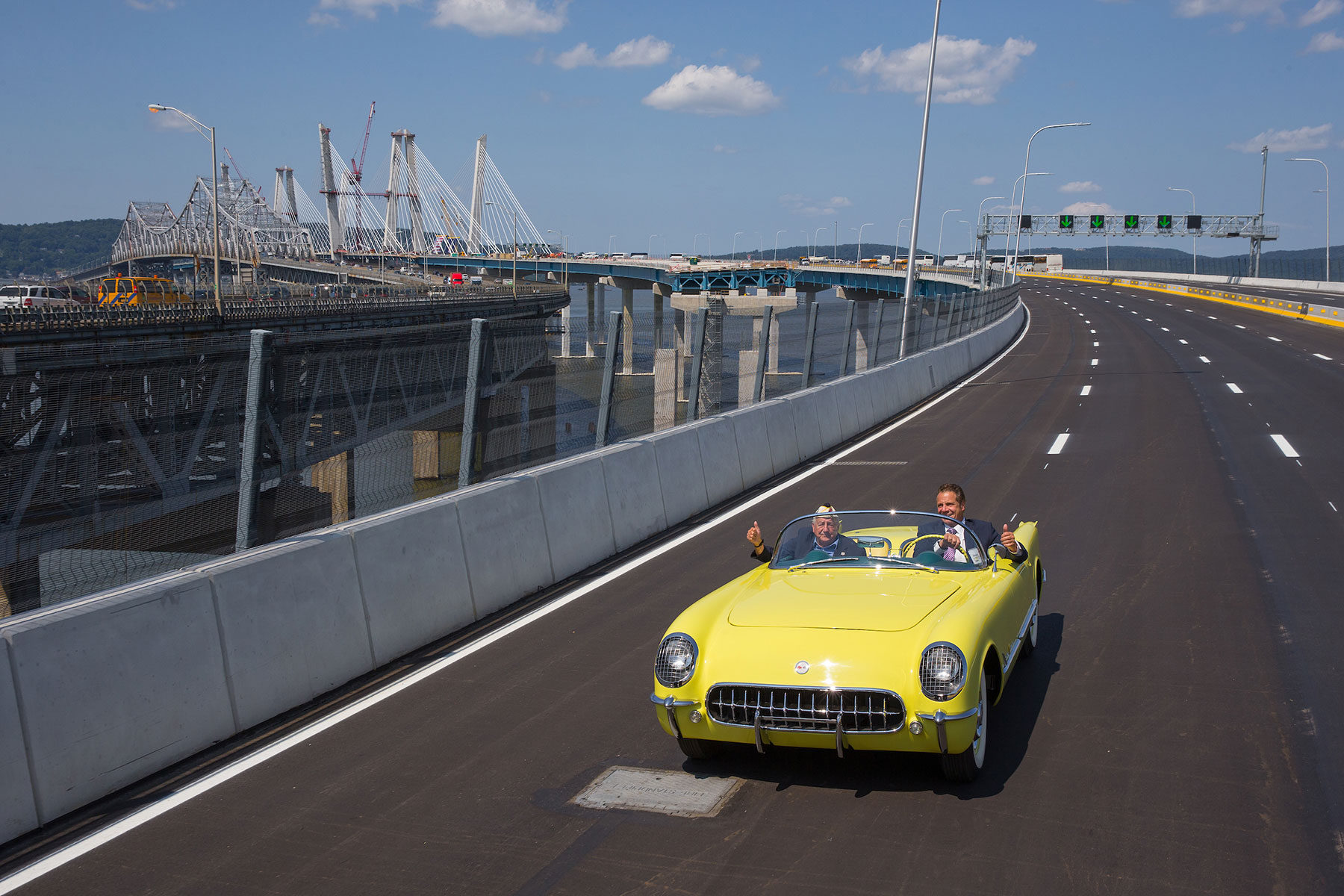 Later this year, TZC is scheduled to complete the second span, which will then accommodate all eastbound traffic.