How We Got Here Building the Iconic Main Span Towers 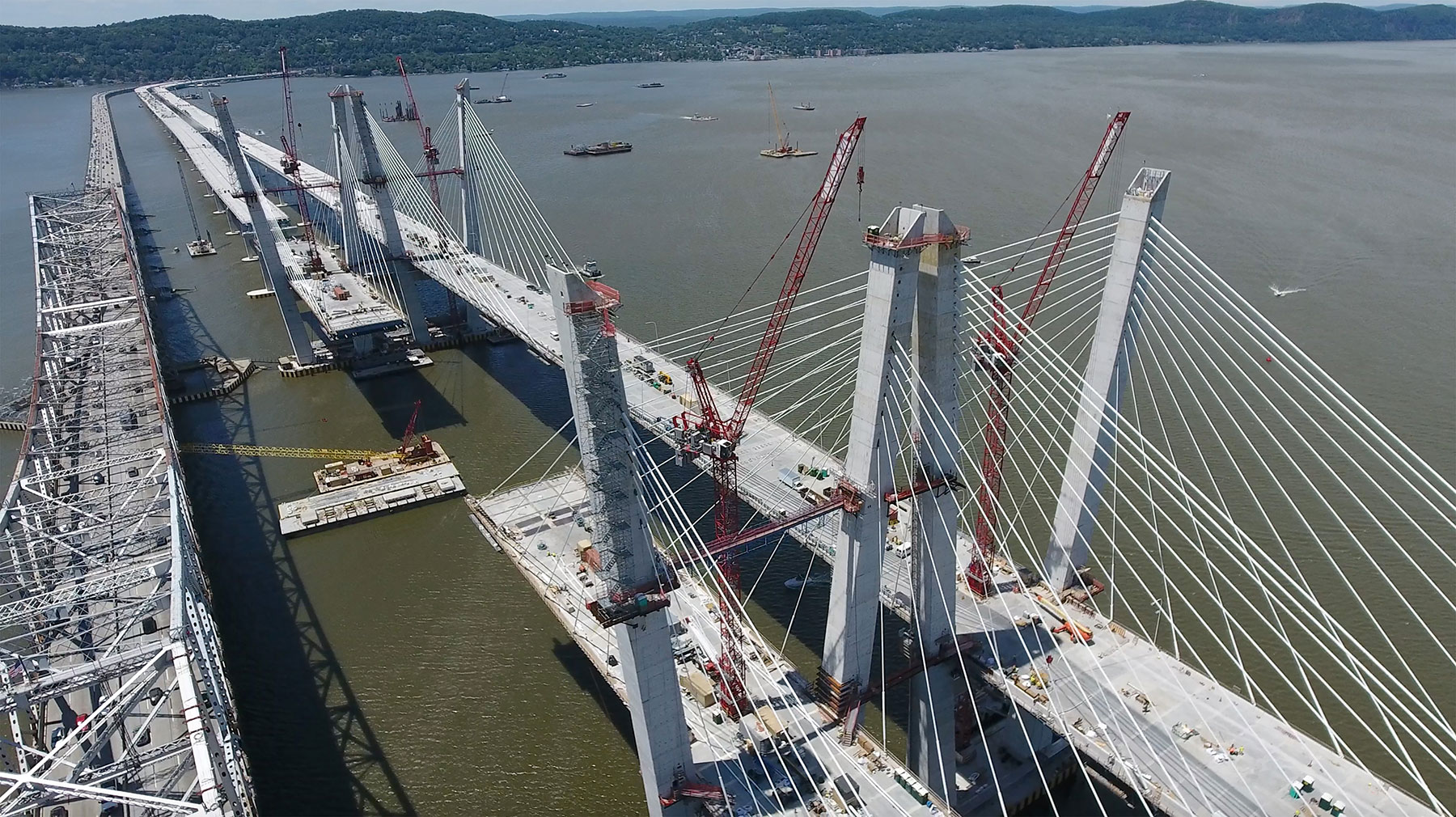 This is the third in a series of stories chronicling the construction of the Governor Mario M. Cuomo Bridge, which is set to fully open to traffic later this year.

The Governor Mario M. Cuomo Bridge is defined by its eight iconic towers, each standing more than 400 feet above the Hudson River.

Tappan Zee Constructors (TZC) began construction of the towers shortly after the completion of their football-field-long foundations in fall 2015. 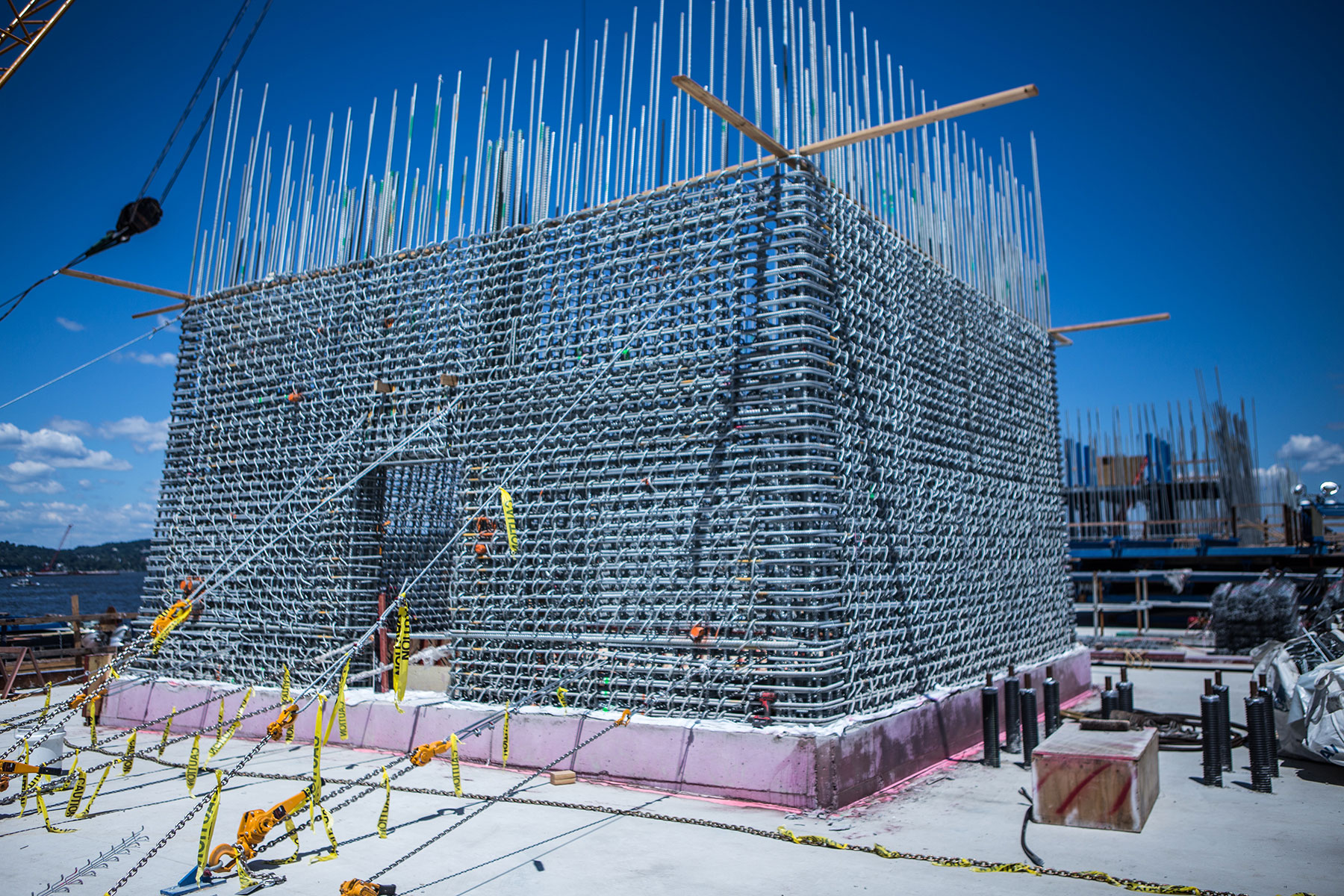 Each tower started as large cages of galvanized steel bars, called rebar, to create the “skeleton” for an individual structure (pictured above). The steel was then encapsulated in formwork (pictured below, in blue) and filled with concrete to create the final shape of tower segment. By their completion in 2016, the towers contained more than 24,000 cubic yards of concrete. 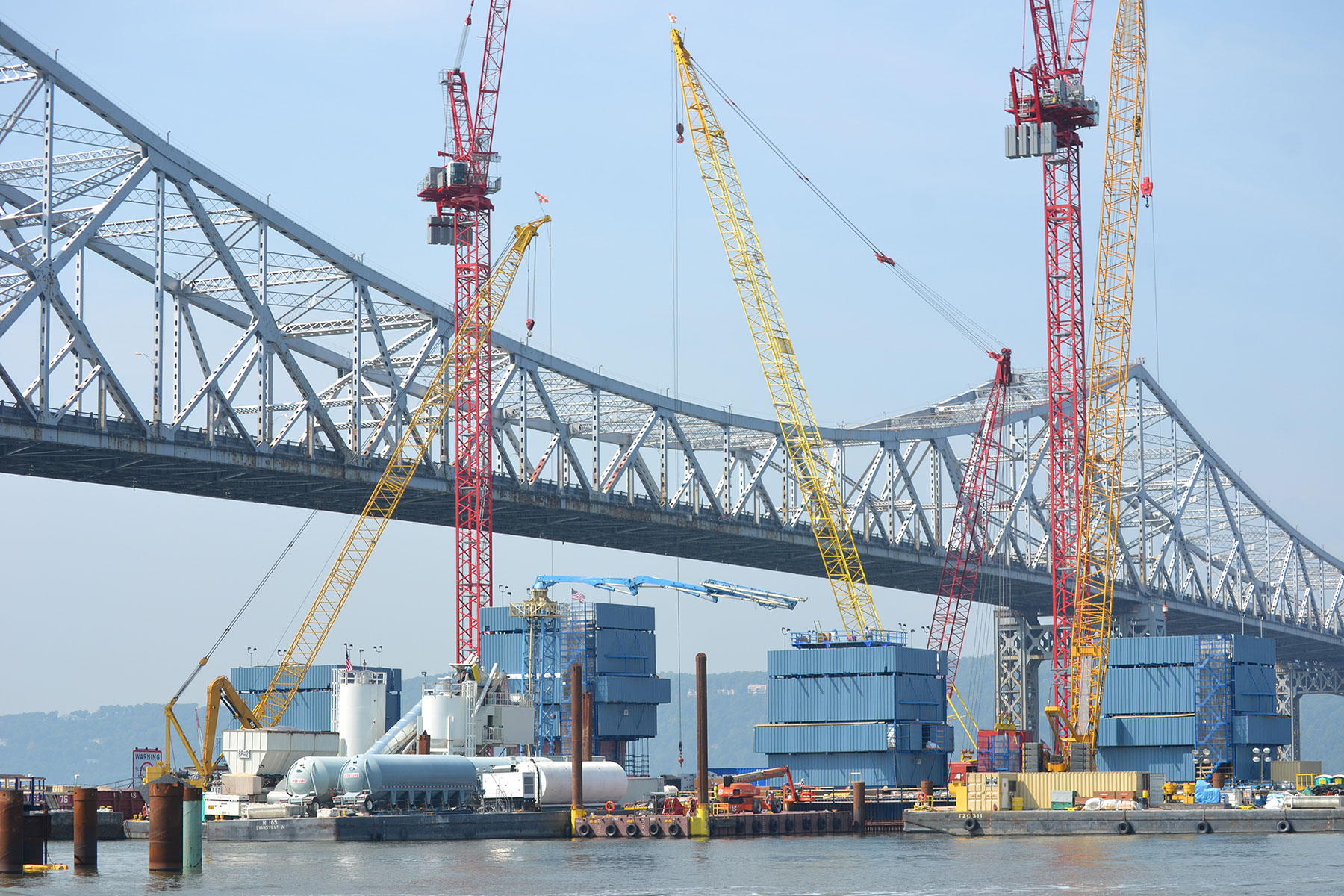 The eight tower construction forms were unlike any other on the project, as they had the unique ability to self-climb as work progressed. This allowed TZC to create the towers in continuously rising segments. After installing the initial sections of steel reinforcement and casting concrete, TZC would “jump” the form to the next level via a hydraulic jacking system.  TZC was also able to alter the shape of the forms, matching the tower’s increasingly tapered design at higher levels.

With each form jump, crews used temporary stairs, catwalks and elevators to reach the next segment. The construction elevators, with their three-ton carrying capacity, proved crucial as TZC crews brought their safety equipment and other materials with them. 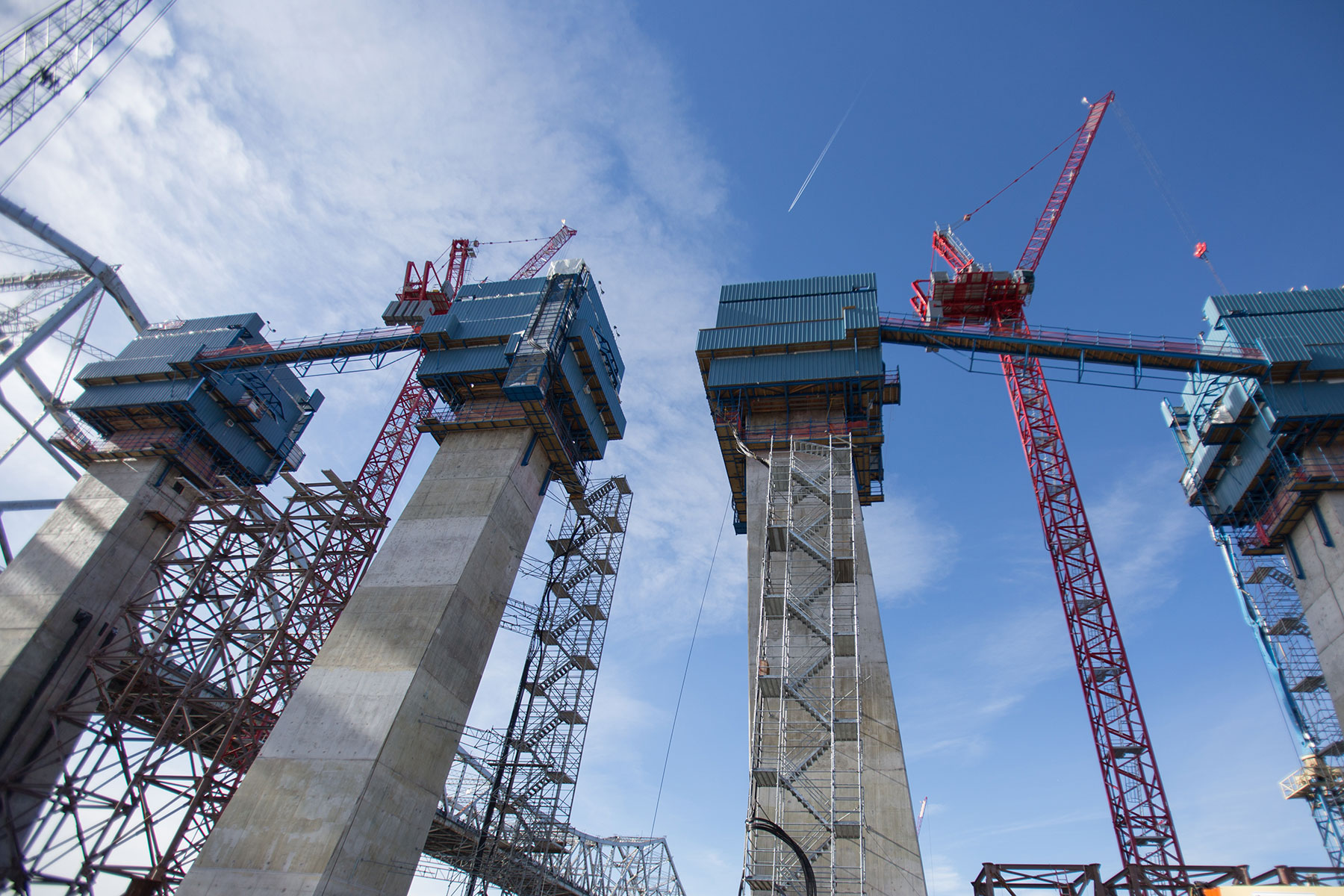 They were assisted along the way by the project’s tallest machines, the red tower cranes (pictured above), which were capable of hoisting up to 25 tons of material at a time with precision.

Each of the four tower cranes extended upward along the main span towers throughout 2016. By the end of the year, the machines reached their full height and assisted with the removal of the blue jump forms – revealing the newly completed towers.

As the towers rose to their final height, TZC began to install the bridge’s stay cable system across the main span. In July 2016, TZC anchored the first of 192 stay cables to the towers, each containing numerous high-strength steel strands tightly packed in protective casings. 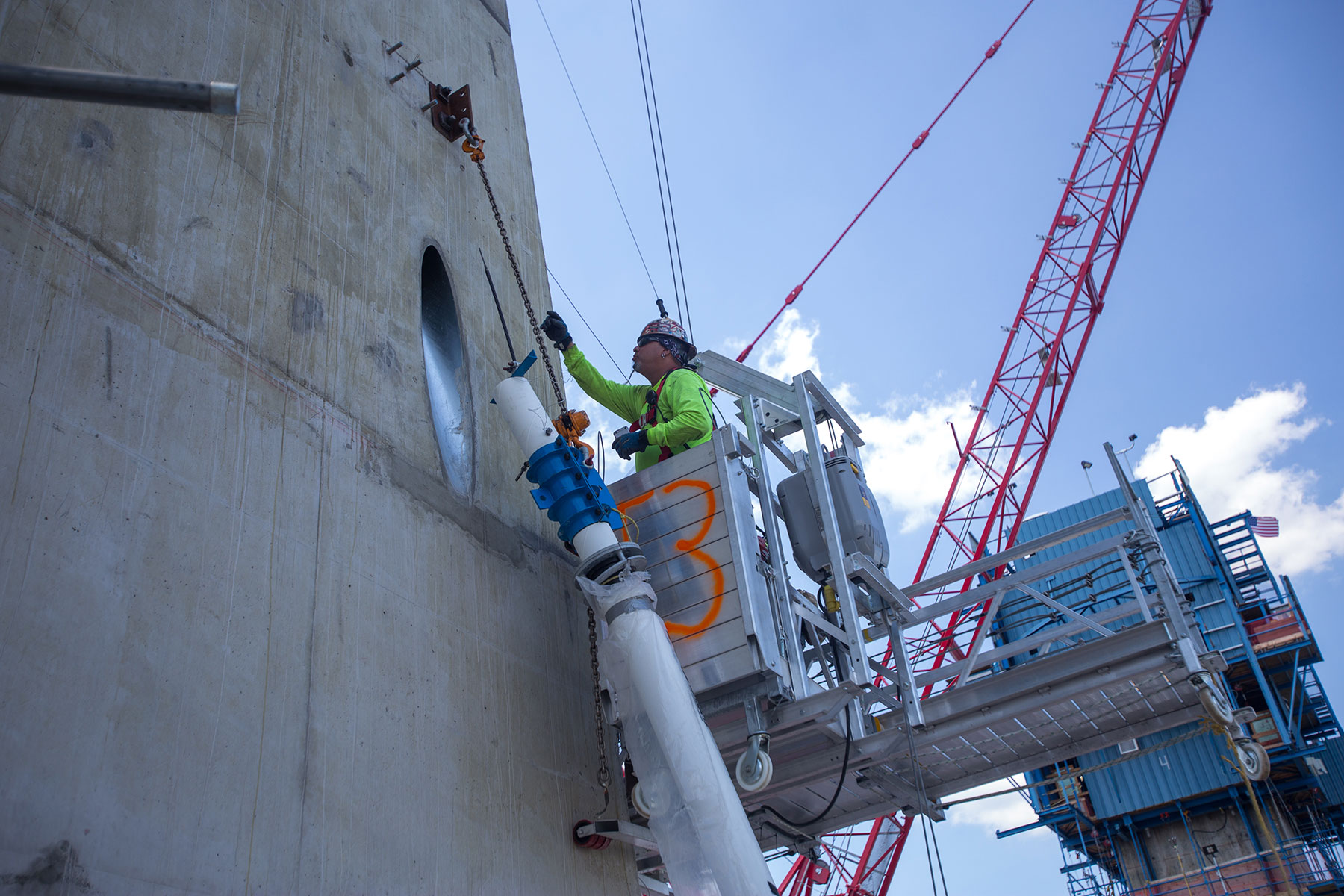 To install the stay cables, TZC first raised each casing with a single steel strand inside (pictured above) and the material was secured to anchor points in the main span towers. The other end of the material was attached to steel girders at the roadway level, with the resulting tension helping to support the new roadway. Workers then fed additional strands through the casing, individually anchoring them at both ends to give the structure greater strength and flexibility. By 2017, with the eastbound and westbound cable-stayed areas completed, TZC had installed more than 700 miles of steel strands – about the distance from Tarrytown to Cincinnati.

TZC also began applying several finishing touches to the towers in the summer of 2017. Permanent maintenance elevators were installed within each tower, each designed to ascend at a five-degree angle, matching the slope of the structures. The installation efforts were also closely coordinated with the work of other teams, including the placing of lighting components and permanent ladders. Following the elevator installation, TZC capped off each tower with precast concrete rooftops, which were built offsite by the Fort Miller Company in Schuylerville, N.Y. – the firm that fabricated the bridge’s main span road deck panels. In 2018, the project team also installed a new peregrine falcon nest box with provisions for a future webcam within one of the towers – replacing the previous nest box in the superstructure of the old bridge.

Each side of the eight towers now features 12 pairs of stay cables, ranging in length from 190 to 623 feet. The entire 2,230-foot cable-stayed area supports a total of 74 million pounds of steel and concrete. The stay cables are also designed to allow maintenance crews to monitor the integrity of each strand and replace them as necessary with minimal traffic disruption without compromising the structural integrity of the crossing. 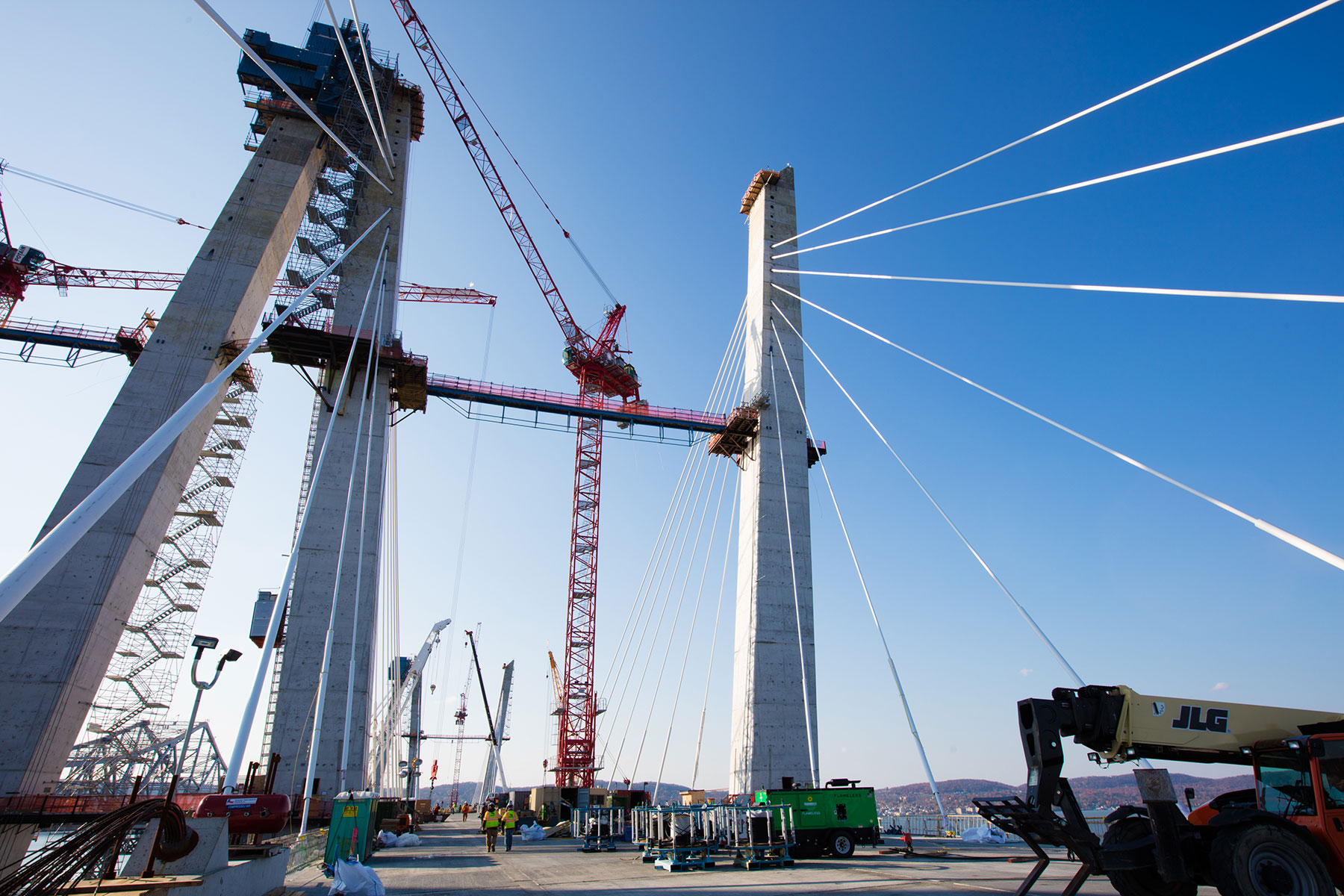 The cable-stayed crossing is the first of its kind on the Hudson River, and is built to last 100 years without requiring major maintenance.