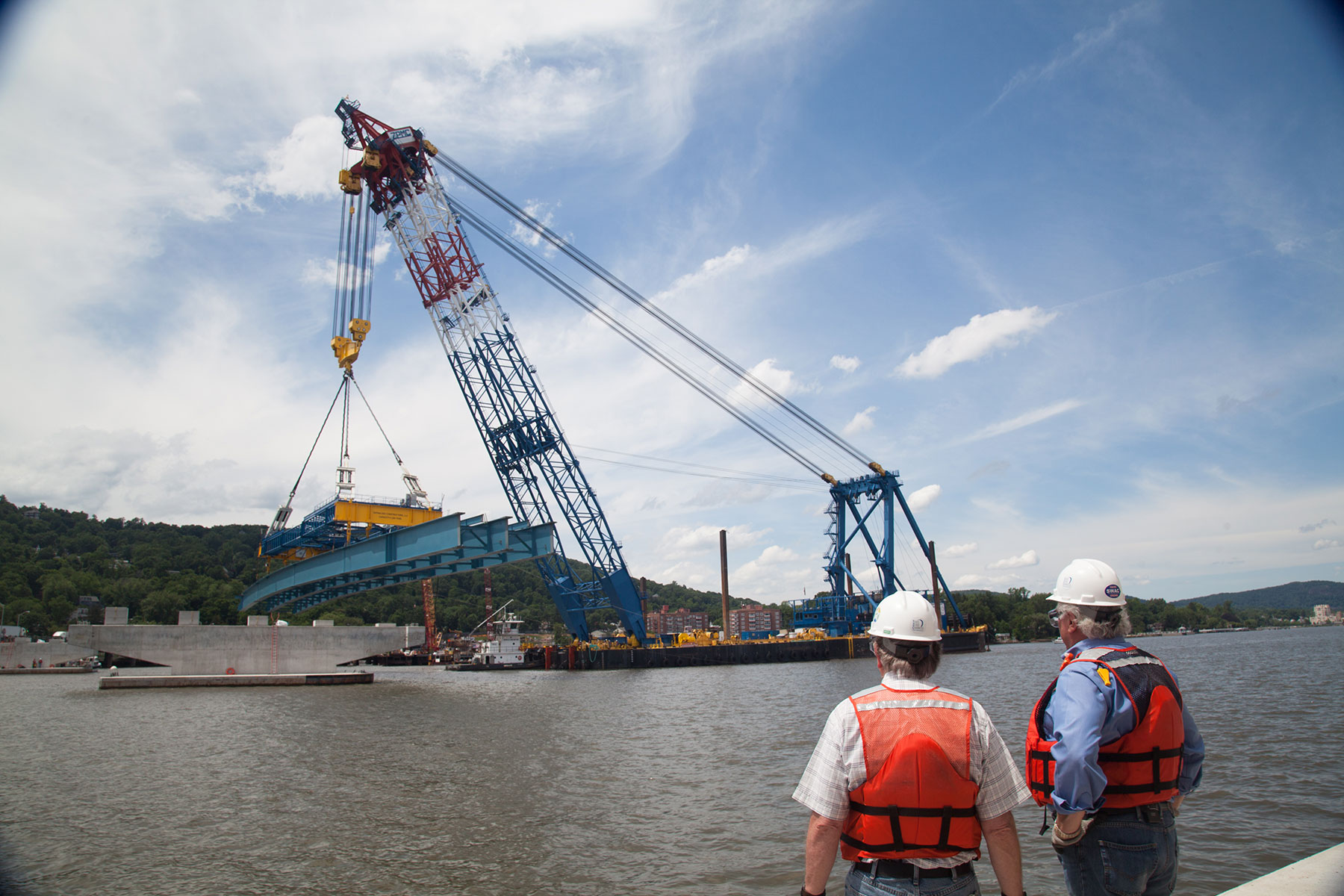 This is the second in a series of stories chronicling the construction of the Governor Mario M. Cuomo Bridge, which is set to fully open to traffic later this year.

The New NY Bridge project has made remarkable progress since October 2013, thanks to the innovative efforts and equipment utilized by Tappan Zee Constructors (TZC).

The largest machine on the project, dubbed  , proved to be a key element to TZC’s success on the Hudson River. After a 6,000-mile journey from California to New York, via the Panama Canal, the super crane arrived in New York Harbor in January 2014 and underwent months of testing, modifications and upgrades to prepare it to erect the new Governor Mario M. Cuomo Bridge. By spring 2015, TZC was already using the machine’s 1,900-ton lifting capacity to lift and set the largest sections of the twin-span crossing (pictured above).

Many of these large sections, including the project’s steel girder assemblies, were prepared off-site at the project’s staging yard at the Port of Coeymans. Located just south of Albany and along the Hudson River, the staging yard allowed TZC to gather and prepare 100,000 tons of welded steel beams, in lengths ranging from 60 to 120 feet. The beams were then combined with high-strength bolts, creating assemblies ranging in length from 290 to 410 feet. This modular construction method allowed TZC to accomplish a great amount of work in a controlled environment, reducing the amount of work required over the Hudson River.

Thanks to modular construction and I Lift NY, TZC was able to quickly and safely set more than 100 assemblies of steel girders and dozens of concrete pier caps.

A custom-engineered frame was built specifically to lift the girder assemblies, using hydraulic cylinders to control each corner of the assembly for precise placement.

The barge-based crane’s unique design allows it to sit high in the Hudson River, reducing the amount of dredging required for the project. By 2017, TZC began using the crane to remove large sections of the old Tappan Zee Bridge (pictured below). 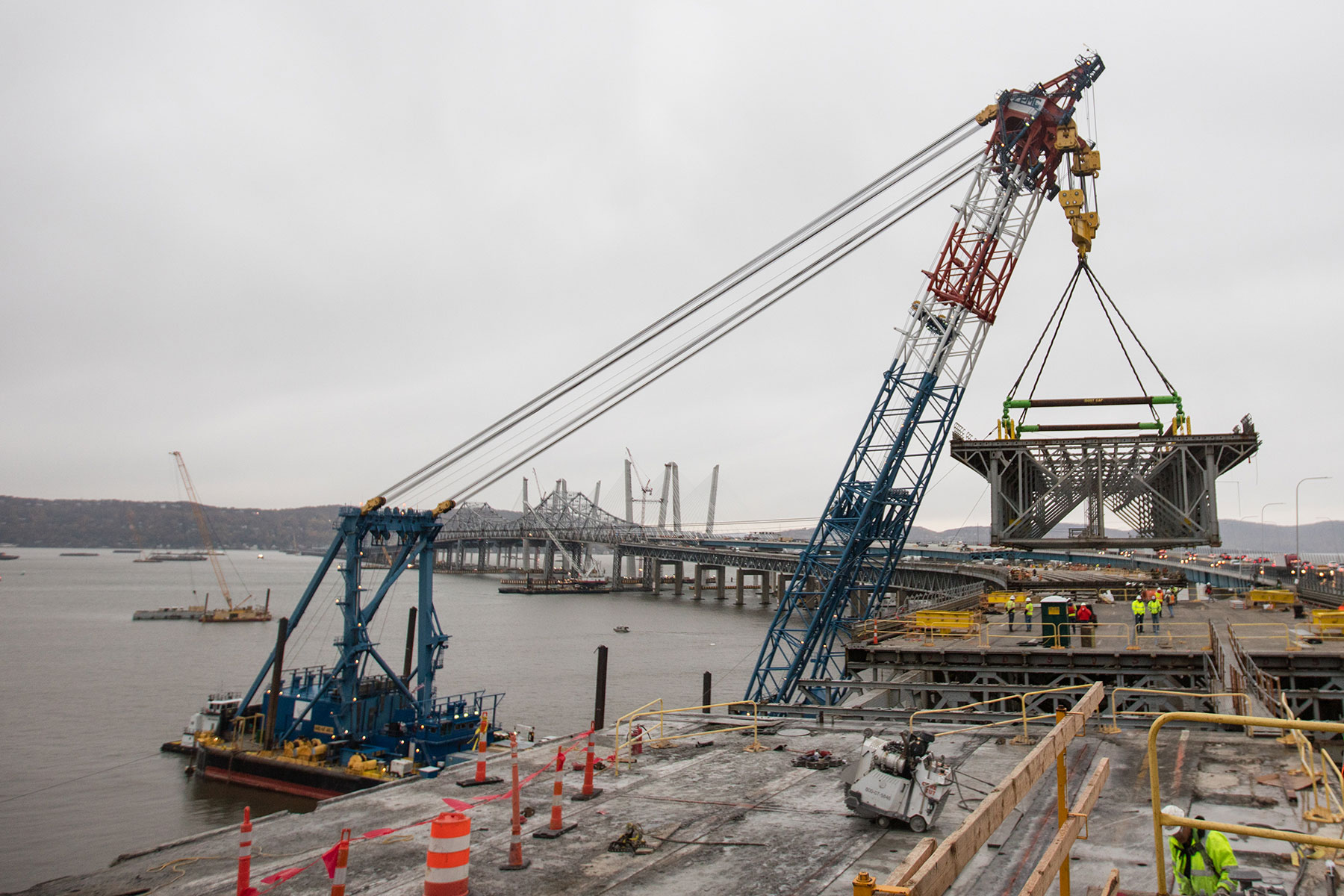 Owned by TZC and officially registered with the U.S. Coast Guard as the Left Coast Lifter, the super crane’s distinctive capabilities will be instrumental to completing the remaining elements of the bridge’s second span this year.

While I Lift NY raised precast concrete elements across the project site, TZC also required more than 300,000 cubic yards of fresh concrete to complete many of the bridge’s piers and foundations. Transporting that amount of concrete by land would add over 30,000 concrete trucks to local roadways – however, TZC implemented an efficient and environmentally-conscious system to supply the majority of the project’s concrete without having to truck most of the concrete directly to the 3.1-mile project site. By using floating batch plants (pictured below) on the Hudson River, TZC began producing and delivering concrete “on demand.” 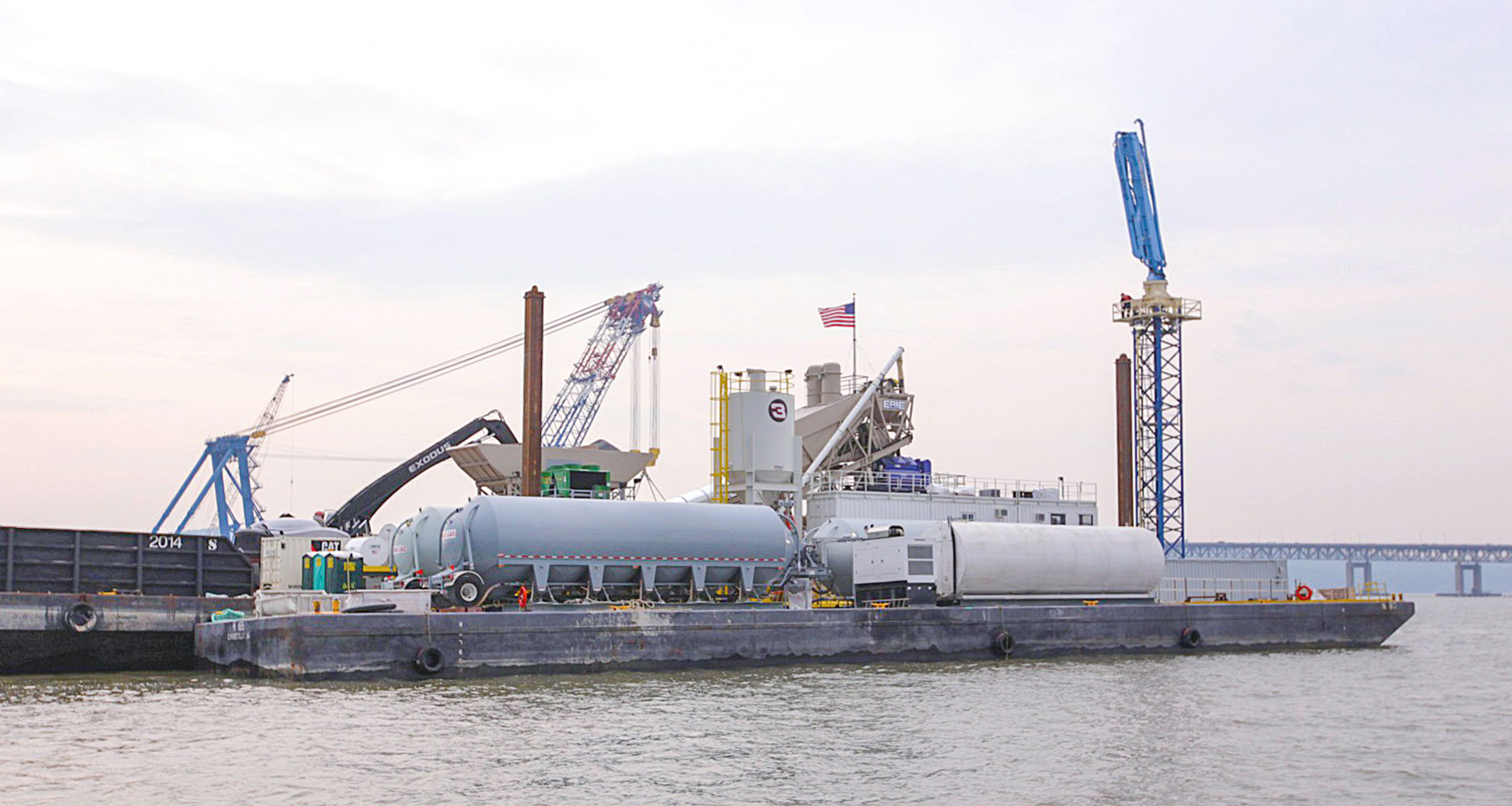 Each floating batch plant was equipped with silos of raw materials such as slag, fly ash, stone, water and cement, and mixed to order and meet stringent specifications. The final concrete mixture would then be pumped through an extending delivery arm to the various sections of the new bridge, including the pile caps (pictured below), piers and roadway. The plants were designed to produce up to 180 cubic yards of concrete per hour, rivaling the capabilities of most land-based batch plants. However, the real advantage proved to be the batch plant’s exclusivity to the project. 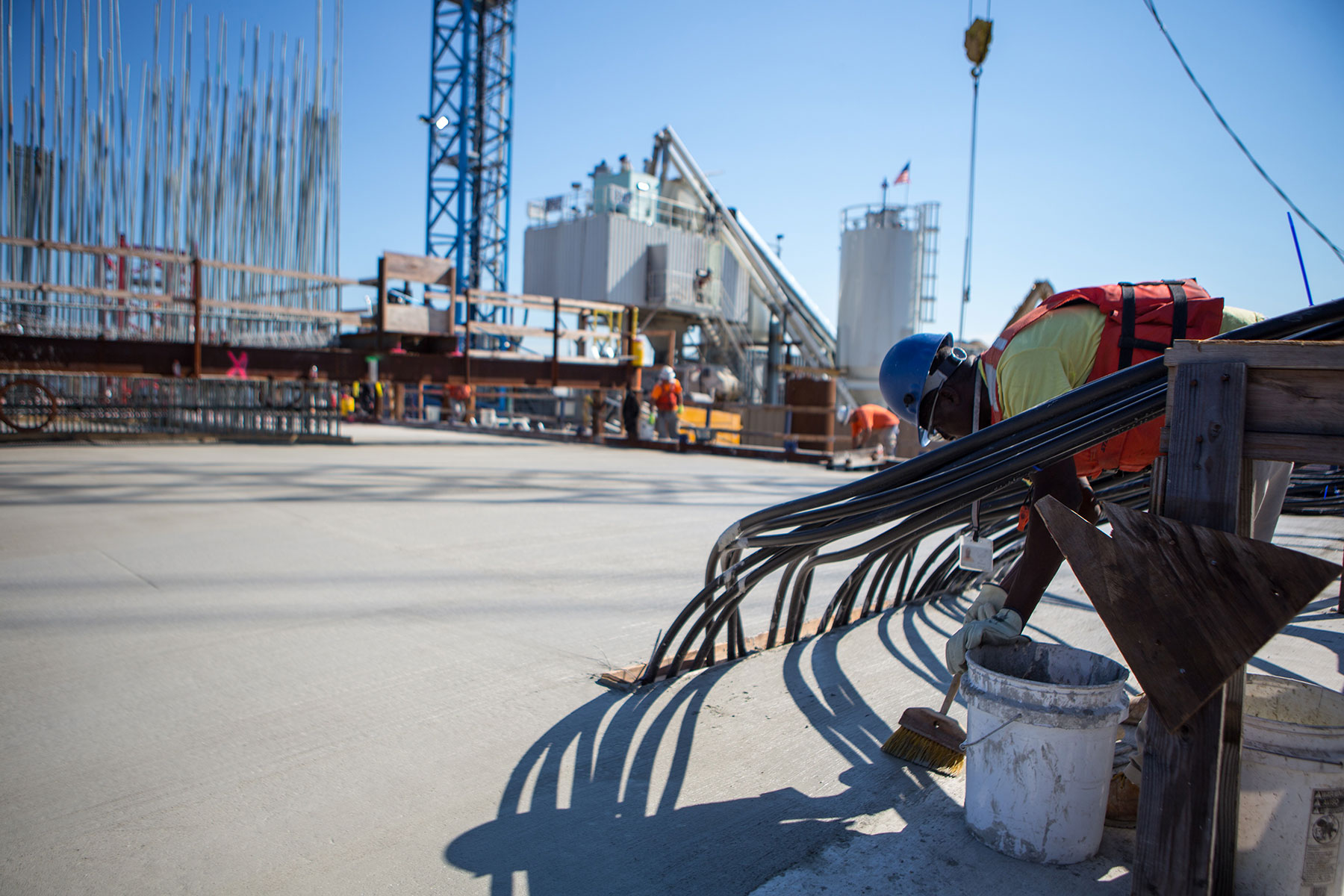 Normally, different projects compete for limited quantities of concrete produced by land-based plants daily, which can lead to shortages and delays during peak construction season. TZC’s mobile plants eliminated the risk associated with a narrow delivery window (90 minutes from batching to placement). With no traffic and minimal distance to contend with, the risk of concrete setting en route was mitigated.

The floating batch plants included several environmentally-friendly features, including an advanced air-quality system to reduce escaping dust particles. All systems on the plants were contained to prevent spillage into the river, with all by-products from the cleaning process stored for proper disposal off-site.

TZC implemented efficient “clean” engines on the plants to reduce the equipment’s carbon footprint. The New NY Bridge project was one of the first in the nation that followed the strict emissions requirements set by the U.S. Environmental Protection Agency (EPA).

Non-road, non-marine diesel engine exceeding 50 horsepower were fitted with diesel particulate filters. Similar high standards were placed on the project’s tugboats and other marine vessels to limit fine diesel particulate matter to less than 3,700 grams per hour —  one of the first restrictions of its kind in the nation.

To ensure that the project’s overall air quality goals were being met, a dozen air quality monitoring stations were installed in the project area in Rockland and Westchester counties. 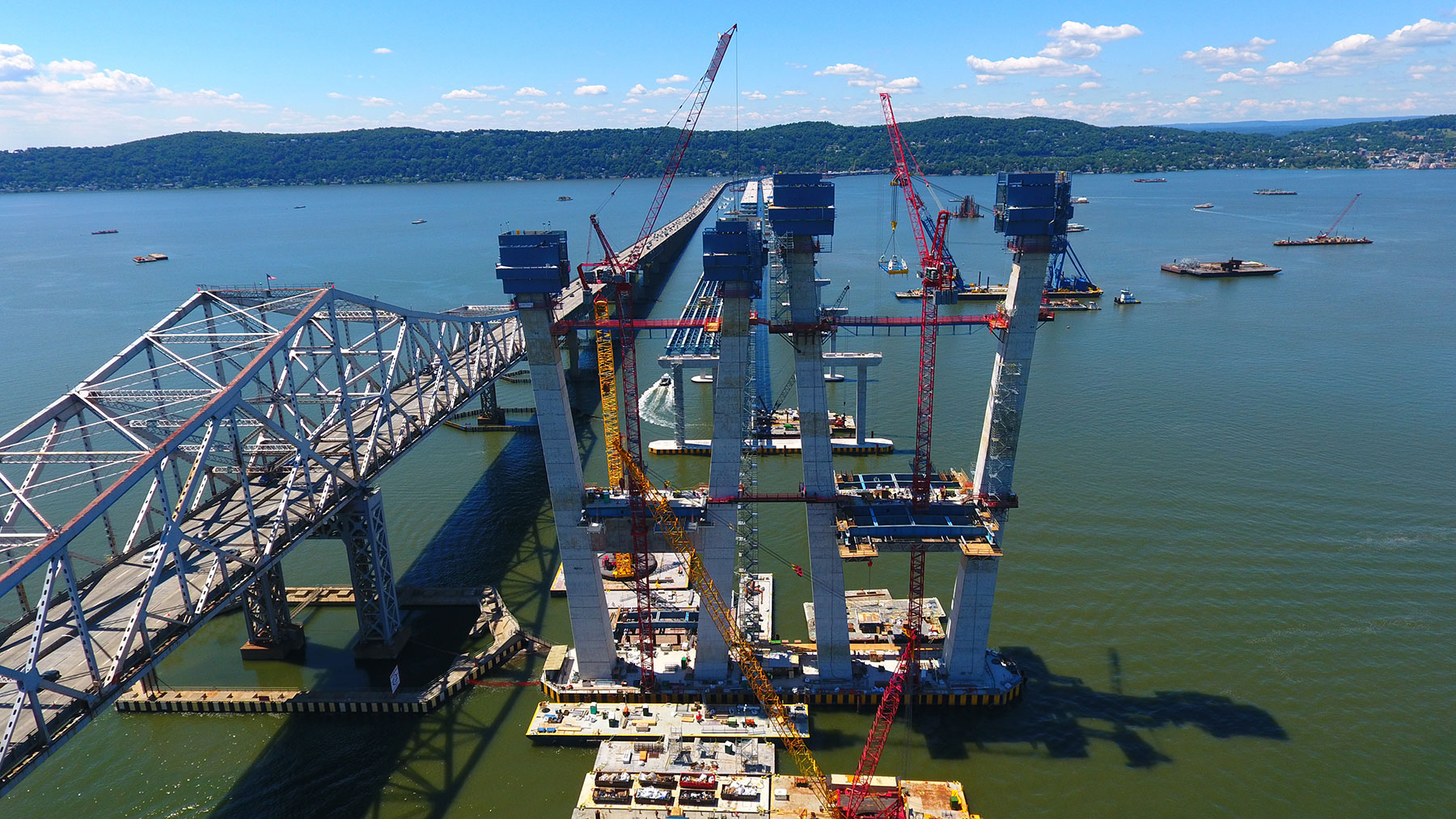 In the coming weeks, the project team will continue to highlight the largest construction accomplishments to date, including the completion of the stunning, cable-stayed main span.