Honored to Give Back Project Manager Serves as Youth Mentor 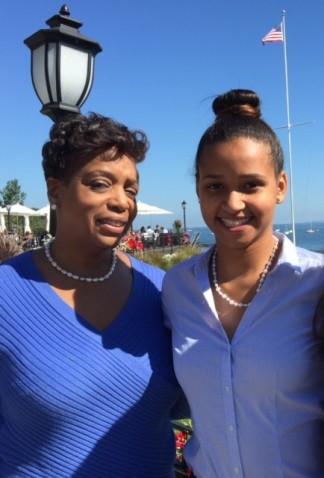 For the past six months, Tracey Mitchell, Diversity Compliance Manager at the New NY Bridge Project, has spent four hours each week as a mentor, sharing her insights and professional experience.

Tracey has been working with 18-year-old Keidy Almonte as part of the Her Honor Mentoring program, which is funded by Judith Sheindlin, of “Judge Judy” daytime TV fame.

This was the first year the state Thruway Authority participated in the 10-year-old mentoring program, which pairs female high school seniors from Westchester County with successful professional women.

“It’s our privilege to partner with the New NY Bridge project,” said Nicole Sheindlin, founder and Chief Executive Officer of the Her Honor Mentoring program and Judith Sheindlin’s daughter. “Tracey Mitchell is a fantastic role model and Keidy has learned a tremendous amount throughout their time together.”

Tracey worked Keidy at the bridge project’s Tarrytown office. Tracey also connected her with the state Department of Labor, where Keidy learned about reviewing certified payrolls and researched wages for the different unions working on the bridge project to determine the member’s fringe benefits.

“I learned how my mentor’s department makes sure there are minorities and females working on the project,” Keidy said. “I also learned what a DBE (Disadvantaged Business Enterprise) is and how the project made sure small businesses got to participate in getting contracts with the bridge.”

Keidy, who attends Saunders High School in Yonkers, called Tracey an “inspiration” because she encouraged her think outside of the norm and helped her develop leadership skills.

She said she has always loved math because the answers are “always black and white.”

But life isn’t often that way and Keidy said she has better accepted those challenges.

“Grey areas are not something you should shy away from,” Keidy said, “but instead embrace.”

For her part, Tracey said it was her honor to serve as a role model for Keidy for 25 weeks.

Keidy recently learned that New York University offered her a scholarship. She plans to study computer engineering in the fall.