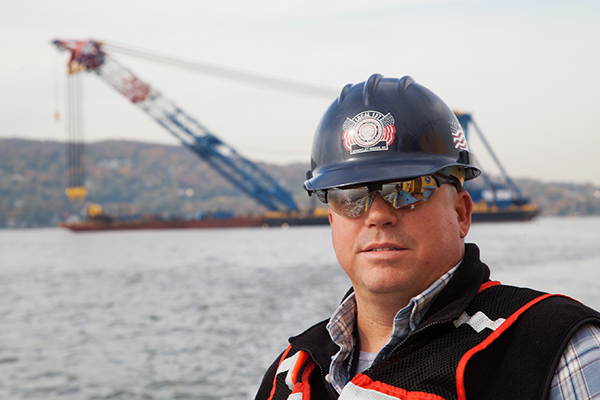 As the I Lift NY super crane dominates the New NY Bridge project site, one Westchester local is preparing to command the massive machine.

Ever since he piloted his first crane at the precocious age of 12, New Rochelle native Ronald Burgess has been on track to one day take control of a machine as massive as the I Lift NY super crane. Groomed by his father, also a crane operator, Burgess has been an engineer for 30 years and is currently a member of the International Union of Operating Engineers Local 137. His career has included work on high-visibility construction projects including the Yonkers Raceway and even the redecking of the existing Tappan Zee Bridge.

Now a member of the New NY Bridge project team, Burgess is once again using his expertise on the Hudson River to help. He and fellow crane operator Doug Comely began working with the super crane shortly after it arrived at the Port of New York and New Jersey in January. As I Lift NY was being modified and prepared for the project, Burgess and Comely became acquainted with every inch of the 328-foot tall machine and the numerous systems that work in sync to raise enormous prefabricated bridge components and other giant loads.

Burgess is quick to note that it takes a highly-skilled team to run the super crane’s many systems. Two operators and a crew of mechanics and deck hands work together to ensure that every mega-lift is carried out safely and efficiently.

Controlling the towering super crane is very different from operating the other cranes on the project, none of which have the capacity to raise even I Lift NY’s 950-ton arm. The operators utilize two separate sets of controls: one to control the lift of the boom and another to control the movement of the barge. Because the super crane does not swing like most cranes, the second operator manipulates a series of eight anchor lines to pivot the entire barge into place. Crisp communication between the operators is essential to their working in perfect harmony.

Capable of lifting 1,900 tons at once, I Lift NY operates at a slower pace than smaller cranes in order to safely handle enormous lifts in the sometimes-challenging conditions of the Hudson River. “When dealing with loads of this size, you really need to take your time,” Burgess observes. “Even the crane goes into a slower operating mode to ensure a safe and successful lift.” 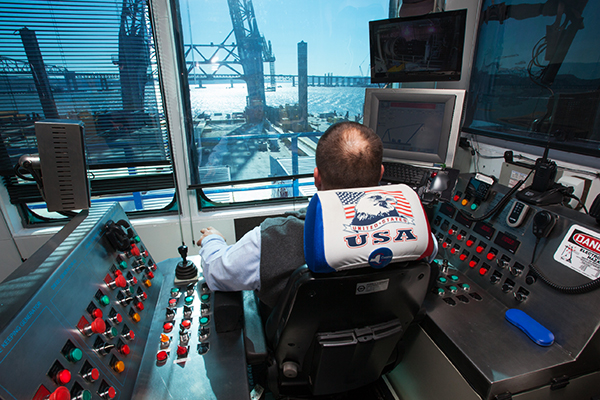 Burgess likens the vast operator’s cab to the bridge of Star Trek’s Starship Enterprise, with cutting-edge touch controls and monitors. He is highly skilled in utilizing I Lift NY’s range of sensors, which detect and analyze the effects of factors like wind and tides, helping ensure the balance and stability of the super crane’s mighty boom.

Among the factors that set Burgess apart from other crane operators in being selected for the prestigious role is his familiarity with the Hudson River and his years of success in captaining other large and complex floating cranes. As I Lift NY begins operations in mid-December, visit the viewing platforms and check out the project’s construction cameras to watch Burgess and the rest of the super crane crew install the project’s largest approach span pile caps, helping to form solid foundations for subsequent construction operations.