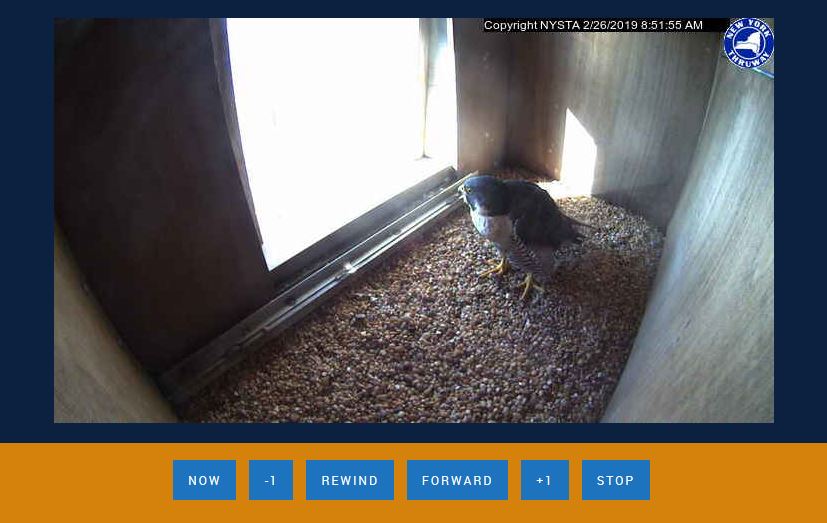 The New York State Thruway Authority is proud to announce the launch of the new Falcon webcam, which captures images from inside a nest box on the Governor Mario M. Cuomo Bridge.

The nest box is installed near the top of one of the bridge’s 419-foot towers, providing shelter and a high vantage point for a pair of endangered peregrine falcons.

These migratory raptors previously resided in a nest box on top of the old Tappan Zee Bridge, which was removed after nesting season last year to allow for demolition operations.

The FalconCam provides close-up views of the lives of these birds, which can exceed speeds of 200 miles per hour during a dive, making them the fastest members of the animal kingdom. Over the coming weeks, the falcons can be seen preparing for the spring nesting season.

The chicks, otherwise known as eyases, hatch approximately one month later. Over the following two weeks, the parents will care for their young almost constantly. As the nestlings age, they are left alone for longer periods of time until they leave the nest after approximately 40 days. As fledglings, the birds remain around the nest until they learn how to hunt and survive on their own. When young falcons mature, they can migrate great distances to establish nests of their own.

Depending on if the nesting is successful and where the eggs are laid in the nest box, FalconCam viewers may be able to watch this year’s chicks peck their way out of their eggs.

You can receive more updates on the project by following @NewNYBridge on Twitter.