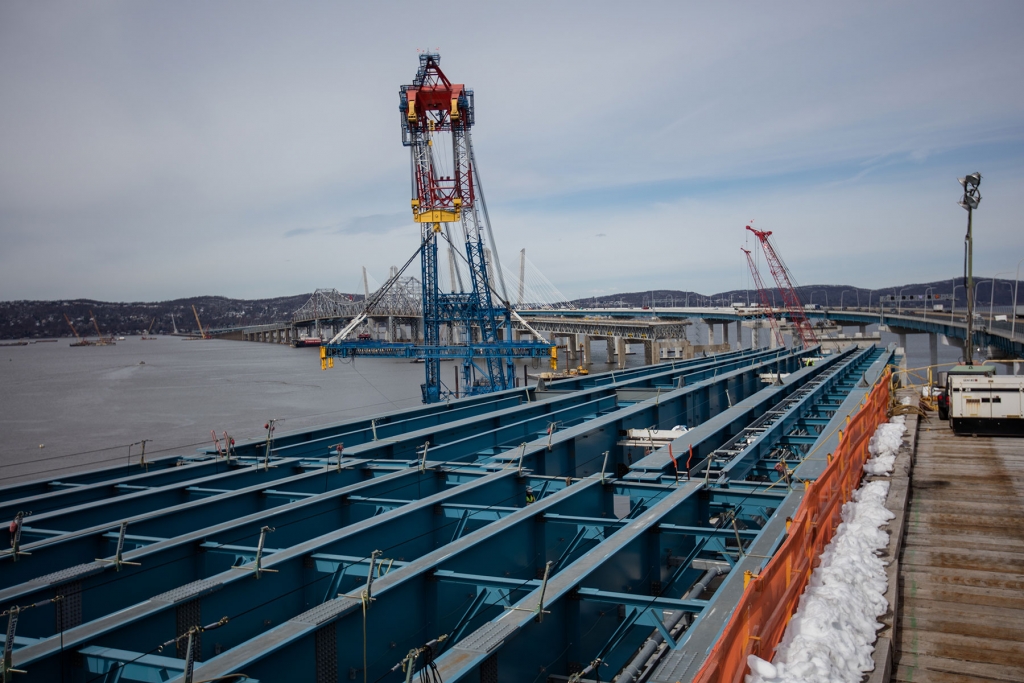 The project’s largest crane, dubbed I Lift NY, is being used to help complete the new bridge’s second span and dismantle the old bridge.

Both aspects of the project are taking place simultaneously, requiring careful coordination between the many crews of Tappan Zee Constructors (TZC). As one group cuts sections of the old bridge into manageable sections, another may be setting steel and concrete on the eastbound span – which is scheduled to open this year.

Both operations require the use of the project’s barge-based cranes, including the largest machine on the project, dubbed I Lift NY. Its incredible lifting capacity allows TZC to install large sections of the new bridge’s structural steel as well as remove enormous sections the old bridge’s roadway.

I Lift NY is currently being used to place the project’s final set of girder assemblies near the Westchester shoreline. The operation is expected to be the last construction operation for the floating crane before it undergoes modifications to further assist with dismantling the old bridge.

The super crane will be used to remove more than a dozen sections of the old bridge’s steel throughout the year, with the largest sections weighing more than 1,300 tons. It will place the material on floating barges for transportation offsite.

I Lift NY will also assist with disassembling large sections of concrete and substructure. Many of these materials will be recycled. The New York State Thruway Authority will provide 135 deck panels units, each approximately 13 feet wide by 50 feet long, to nearly a dozen state and local municipalities to be repurposed for other bridges and roadways across the state.

The old bridge’s concrete piers will soon be removed.

Previously, the super crane successfully placed thousands of tons of materials for the new bridge, including precast concrete pile caps, giant crossbeams in between the main span towers, road deck panels and more than 120 girder assemblies, some 410 feet long.

Since dismantling operations began last October, TZC has successfully removed the landings of the old bridge in both Westchester and Rockland counties, including the steel and concrete located above the Metro-North Railroad Hudson Line in Tarrytown.