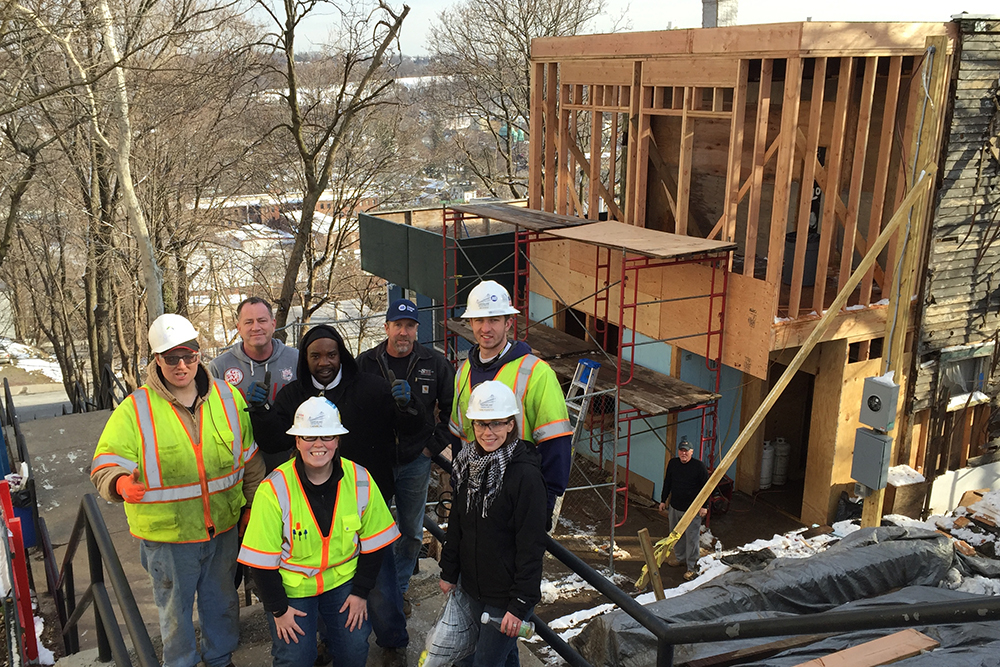 Volunteers from Tappan Zee Constructors, LLC are helping build homes for veterans and their families in Westchester County.

This winter, volunteers from Tappan Zee Constructors, LLC (TZC) are lending their time and talent to Habitat for Humanity of Westchester’s latest endeavor: top-to-bottom renovations of homes for Iraq War veterans and their families.

“We are grateful for the partnership with the Tappan Zee team – amazing!” said Jim Killoran, CEO and executive director of Habitat for Humanity of Westchester County. “They are not only building bridges over the Hudson but homes for veterans with Habitat of Westchester.”

The “extreme makeover” effort started when Habitat for Humanity purchased three foreclosed houses from the City of Yonkers in the Battle Hill neighborhood.

The properties have since undergone extensive restoration, with volunteers gutting the interior, replacing walls and fixtures and reinforcing support beams. Two single-family homes are finished and occupied, and TZC is helping assist Habitat in refurbishing the third property. The TZC crew is teamed with several journeymen from Carpenters Local 279, who are throwing their shoulders into the project.

“Getting TZC together with Habitat for Humanity was a natural partnership between capable and motivated teams dedicated to improving the local community,” said TZC Field Engineer Max Hegedus, who helped organize the effort. “Working with Habitat has been both fun and rewarding and we look forward to building upon our initial progress as the weather improves.”

TZC is also donating a variety of safety supplies to Habitat for Humanity, including hardhats, gloves, glasses, earplugs and other safety equipment.

“It’s a great opportunity to give back to the community in which we’re working,” TZC Human Resources Compliance Officer Hannah Carmical said. “We’re so proud they’re lending their skills to help our local community.”

Habitat for Humanity of Westchester is an affiliate of Habitat for Humanity International, the not-for-profit, ecumenical Christian housing ministry founded by Millard and Linda Fuller in 1976. The organization of volunteers seeks to eliminate poverty and homelessness throughout Westchester County, and make affordable shelter a matter of conscience and public action. Habitat invites people from all walks of life and all religious and non-religious beliefs to build houses in partnership with families in need.