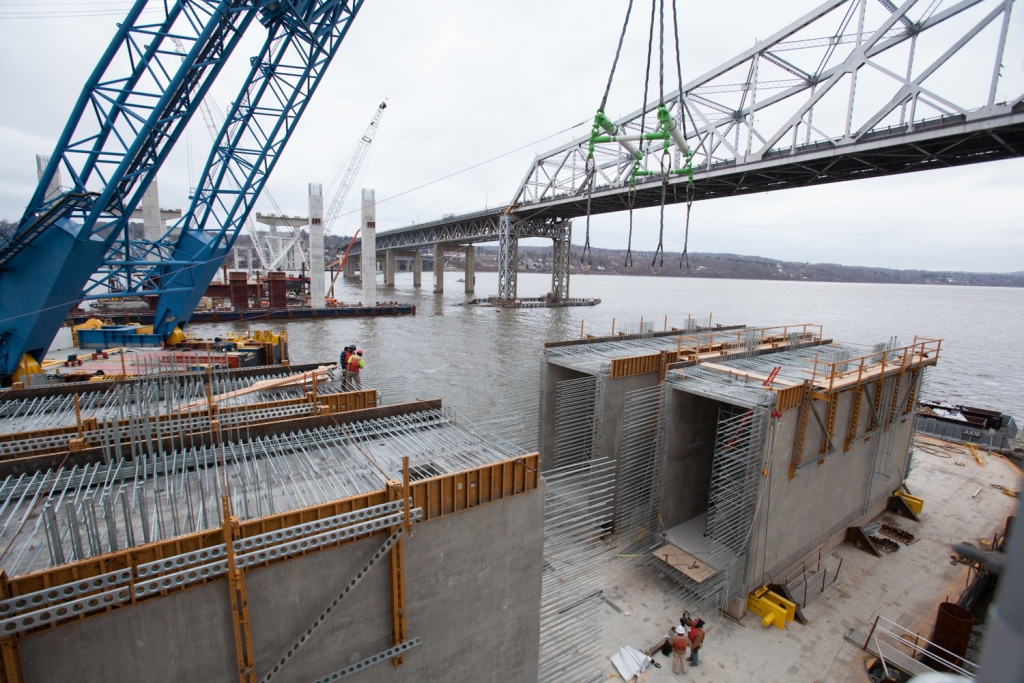 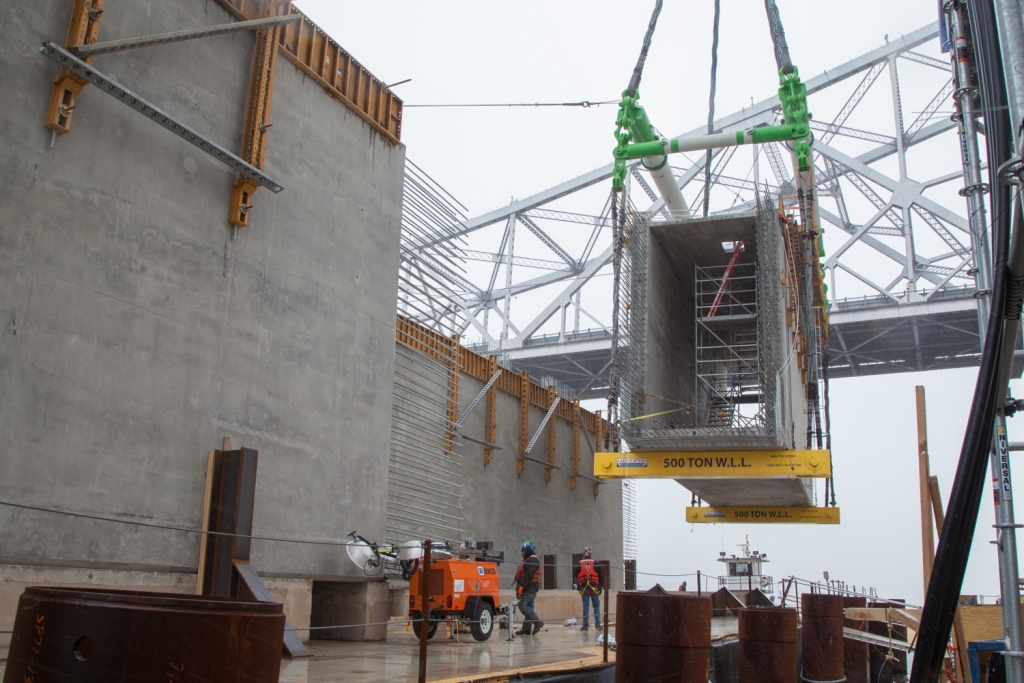 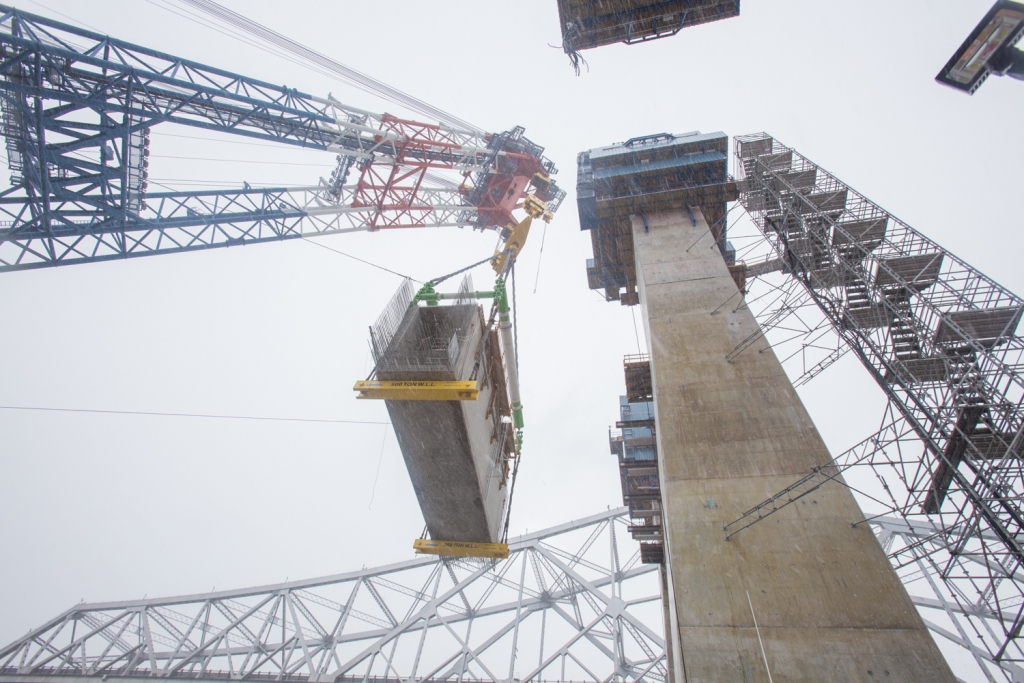 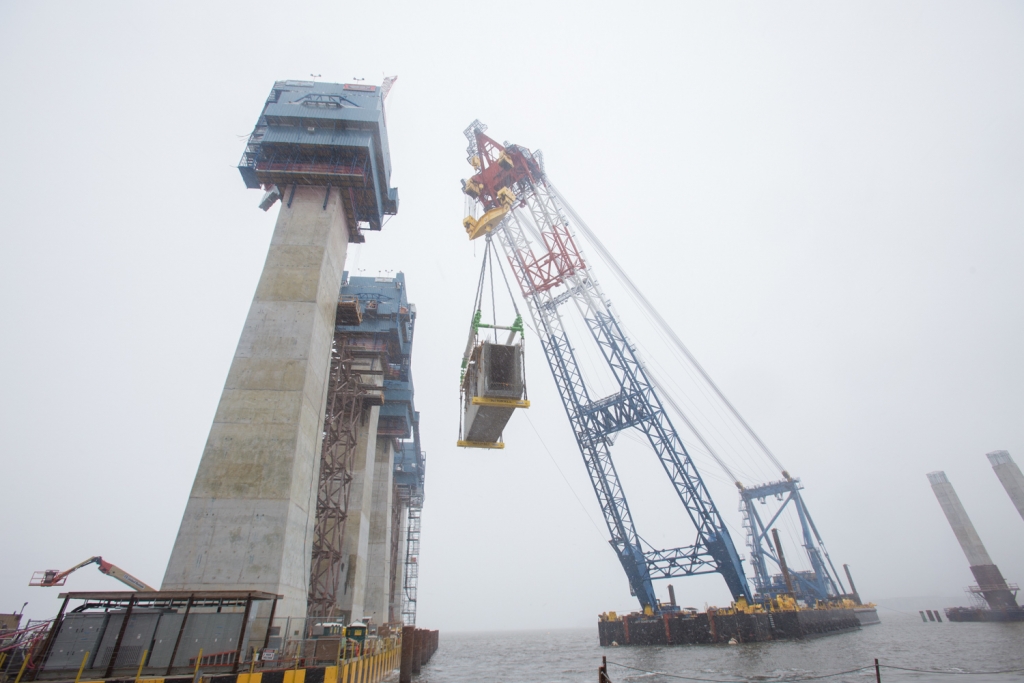 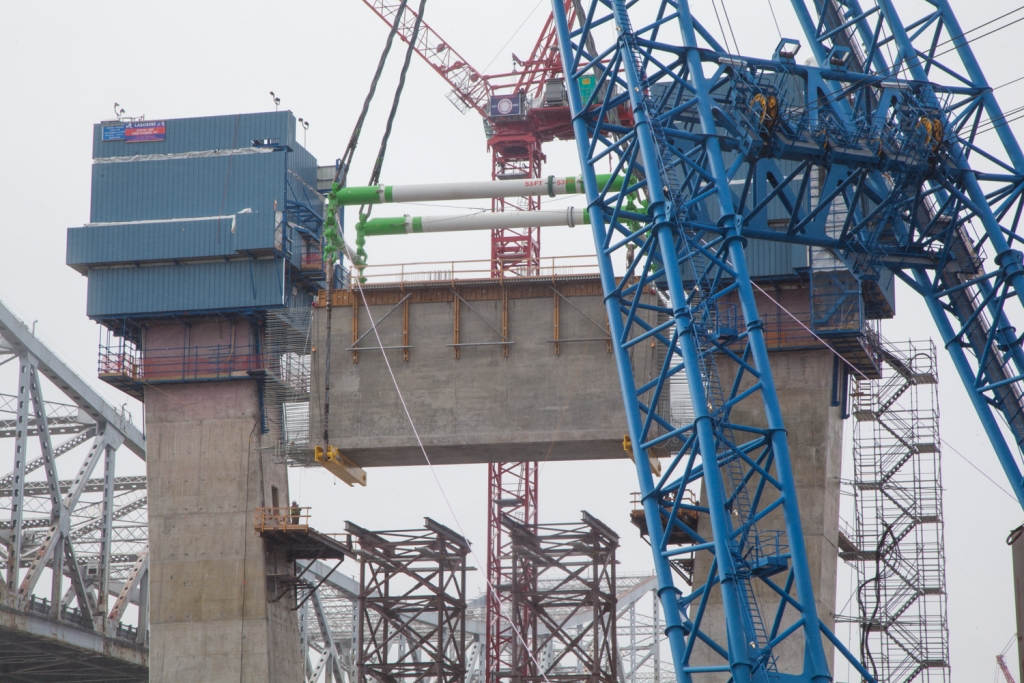 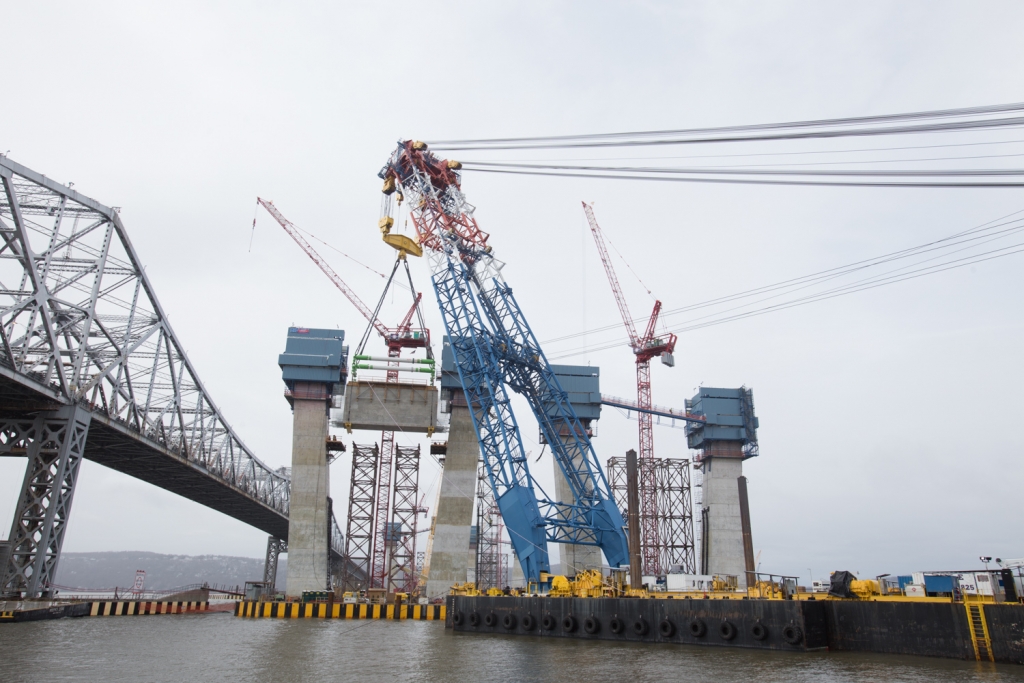 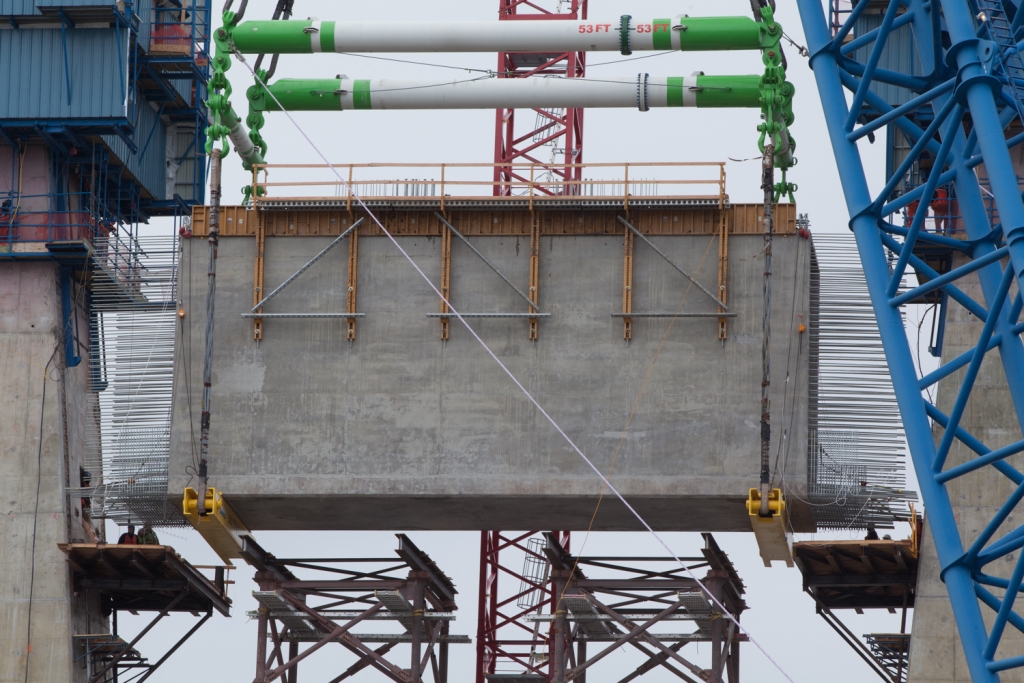 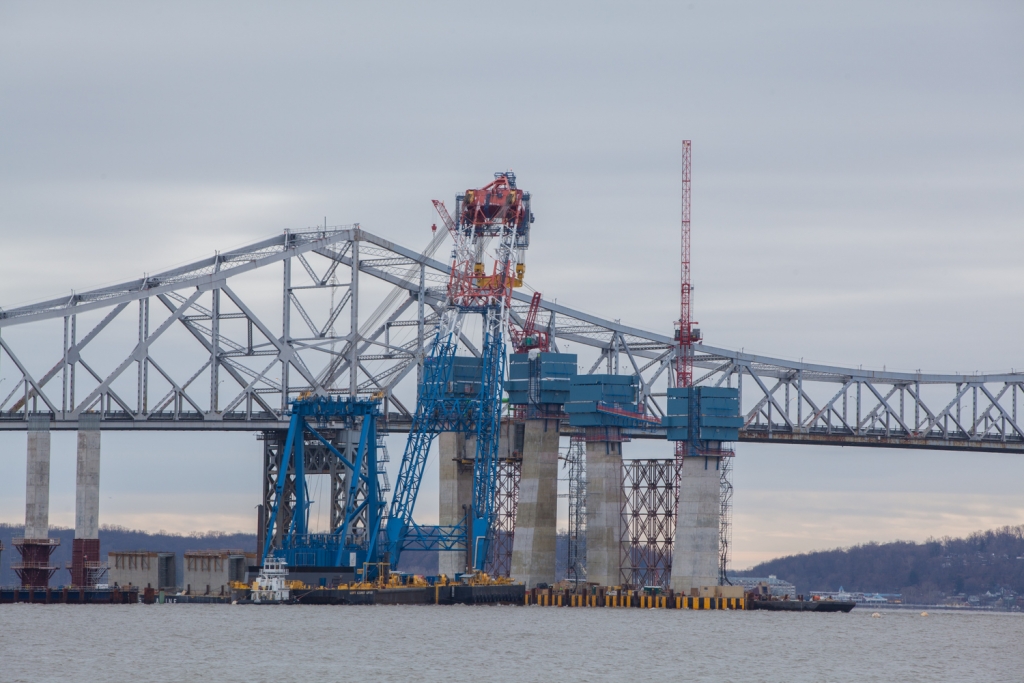 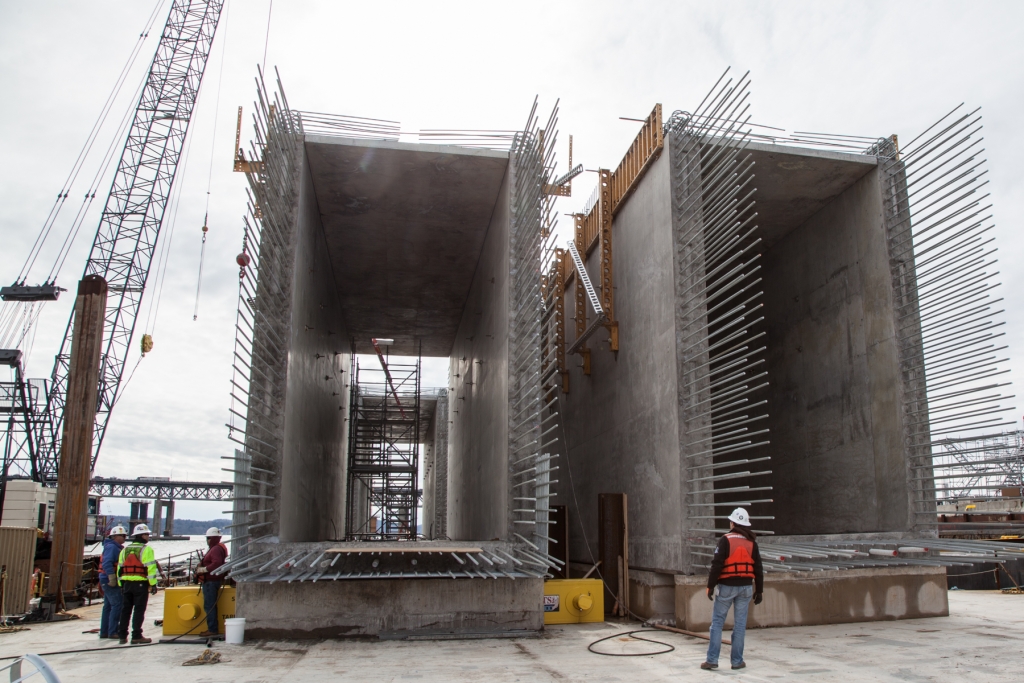 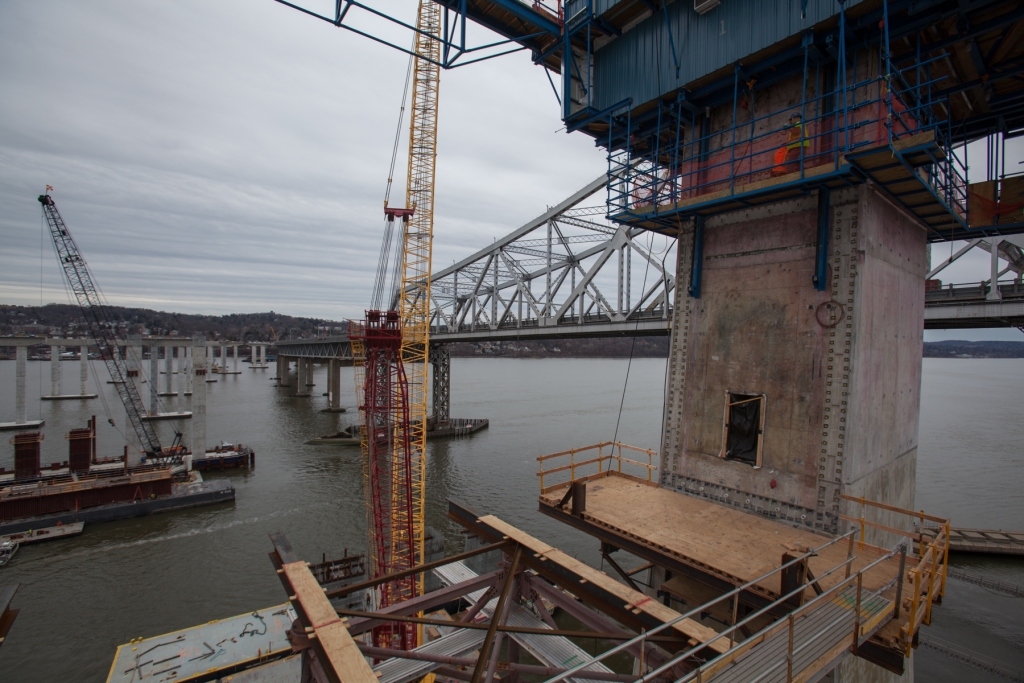 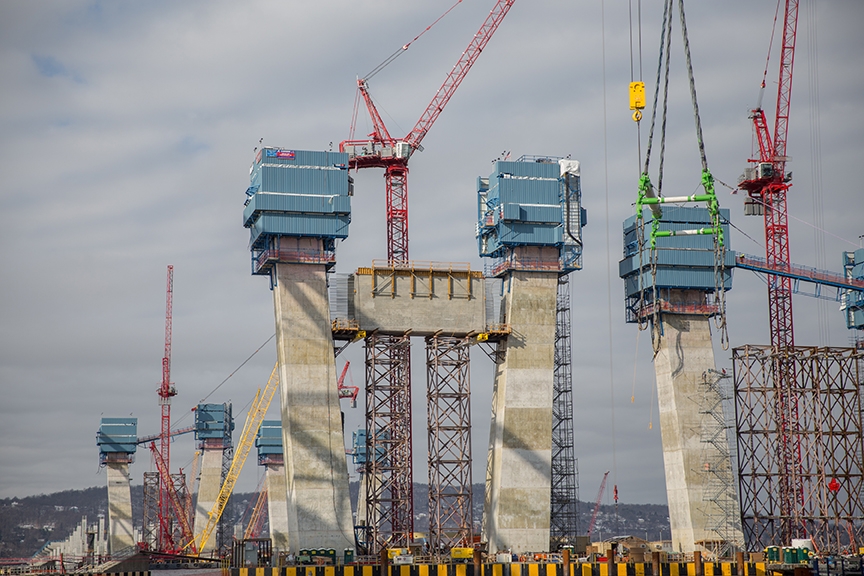 The impending connection sets the stage for continued construction of the eight towers on the twin crossing and the future road deck.

Coastal Precast Systems of Chesapeake, Virginia, fabricated four crossbeams: two 70-foot-long beams for the westbound bridge (which includes the future bike-pedestrian path) and two 60-foot-long beams for the eastbound crossing. Weighing nearly 3,000 tons in total, the four beams were cast on a floating barge, which then travelled from southern Virginia through New York Harbor and up the Hudson River. 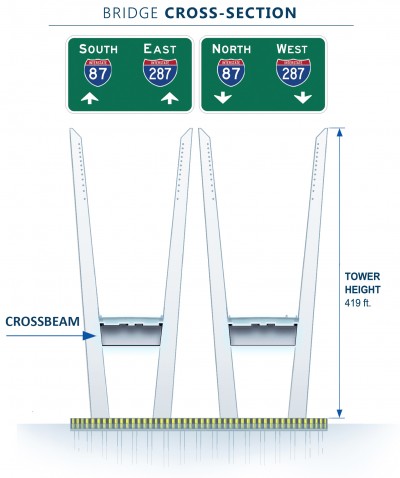 The crossbeams form the horizontal segment of the H-shaped main span towers, providing support for the rising towers as well as the future road deck.

After arriving at the project site, the crossbeams were inspected and prepared for installation between the towers. The massive segments are being lifted into place by the I Lift NY super crane, the only crane on the project capable of the job.

Taking several hours, the first 650-ton crossbeam was precisely placed, more than 100 feet above the river. The work occurred in light snow, which required additional preparation to maximize safety.

“Weather conditions on the Hudson River can always be challenging,” TZC engineer Andre Markarian said. “We always pay close attention to weather reports so our teams can prepare accordingly.”

Temporary steelwork will hold the crossbeams in place as crews make permanent connections to the towers. The strength of these connections is critical to the integrity of the bridge, securing the outward-angled towers as they grow to their ultimate 419-foot height.

Three crossbeams have been installed; the remaining one will be placed in early March.

In addition to reinforcing the cable-stayed bridge, the crossbeams will support the future road deck of the main span.

Deck operations are scheduled to begin this summer when TZC places steel sections on which large road deck panels will be installed. Supported by steel cables, the structural steel and deck work will continue outward from the towers until meeting with the advancing approach spans from Rockland and Westchester.

Stay up to date on TZC’s construction progress by subscribing to our newsletter and following us on Twitter at @NewNYBridge.

*This article was updated on February 29, 2016 to reflect the progress of construction.